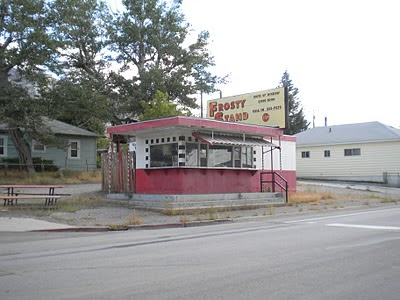 ﻿
The girl came out of nowhere and set up the small frosty ice cream stand at the corner of Murray and Main Streets in Ely (EE-lee) Nevada, population 4,500 souls. It was in 2008, just as the US toppled into recession but before the collapse of the world economy. Amazingly, the frosty stand and town flourished. Frosty ice cream was an instant hit and people came to Ely from as far away as Wells, Nevada to the north and Las Vegas in the south to taste the famous flavors.
The first whiff of something wrong was when the elderly began to die. The coroner shrugged, “Joe had a heart condition.”
Or, “Aunt Maude was 98 years old.”
Such is life.
But then the infirm began to die, the old and not so old, the ones with afflictions and disabilities died. And as if black cloud hovered over Ely, the town began to wither. Stores closed and many folks up and left, saying they were afraid, but fearful of what no one could articulate.
Brody Brown, a White Pine County Sheriff’s deputy who was responsible for Ely, took an interest in the town’s sudden misfortunes. Brody was a former linebacker for the University of Nevada football team and he had a try at pro ball, but failing in the NFL, he had resigned himself to a career with the White Pine Sheriff’s Department. Brody also felt a responsibility to keep an eye on the new girl who ran the frosty stand. He readily admitted to himself that he found her attractive, alluring, and figured she was someone he could settle down with. Where she came from was a mystery, which Brody felt he had to resolve.
The skyrocketing Ely death rate caught the attention of the Nevada Criminal Division, which came to town with health officials and launched an investigation, even interviewing the girl who ran the ice cream stand. But nothing came of it, especially after they talked to the girl and tasted her frosty.
Yet people still continued to die. The very old were gone, the disabled had perished, and now anyone with a whiff of past or current l troubles with the law began to die. Someone was purifying Ely, as if a cleaning agent had come to town.
On his own, Brody had researched the deaths and determined without a doubt that all those who had died had at one thing in common, they had visited Frosty Stand. So one evening, Brody stationed himself outside  and waited for the girl. When she closed the stand and came out, she looked at Brody, giving him the trace of a smile.
And that is the last thing Brody recalled.
Now Body sat across from the head psychiatrist at the Nevada Health Institute, which is located outside of Reno.
“And that is all you remember.” The doctor asked.
Brody nodded. “But the girl did something to me. I know it.”
The doctor smiled. “You’ve been here almost two years and you have been semi-comatose, never speaking or responding, as if you were deaf and dumb. We had given up on you.”
Brody looked at the doctor, but he did not speak.
“And then suddenly you came out of it yesterday. You were talking and very agitated, insisting you had to see me.” The doctor said.
Brody nodded.
“So what happened? What broke your spell so suddenly?”
“I saw the girl.” Brody answered.
“You saw the girl? You mean the girl from the frosty stand?”
Brody nodded.
“Where did you see the girl?” The doctor asked.
“Here.” Brody responded. “The girl's working in your cafeteria.”
Posted by Tom Reese at 9:29 AM No comments: 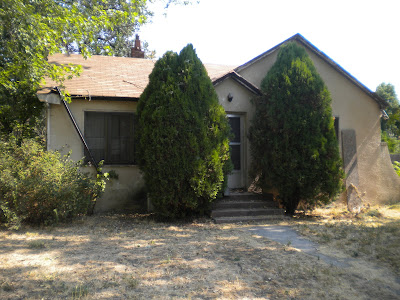 They parked in front of Helen’s small, stucco cottage, the front door flanked by the overgrown evergreens. The house had a forlorn look to it, gloomy.  Remer led the way knocking on the door, holding his yard plan and looking around at the sun -burnt lawn.   Remer banged the door knocker again, a little harder this time.
“Give her a minute.” Cannon said. “Maybe Helen’s in the kitchen.”
After a short delay,  they headed around back.
Cannon went to the back porch and looked through the small glass panes. “She’s not in the kitchen.” He said glancing at Remer who walked back by the fence and stared.
Someone was in the alley.
“I don’t like this.” Cannon called. “Let’s get in.”
Remer nodded, saying something that Cannon did not catch.  Cannon tapped the small glass pane by the door knob with a folding knife.  The glass tinkled to the porch and he reached his hand inside, turning the deadbolt lock.
Cannon waved to Remer who was still at the fence. Cannon gently pushed open the back door, not wanting to scare the elderly lady if she were coming into the kitchen. Remer jogged over to Cannon and Remer led the way into the kitchen, where they hesitated as he called out for Helen.
All was quiet.
The two men looked at each other. They moved from the small kitchen into the dining room, then into the living room, but the house was deserted. Dust motes floated in the late morning sun. No sign of Helen.
Cannon returned to the living room and noticed a small pad on the side table, a scrawled note in uneven letters:  -Remer, my diary, Warm Springs.
“Take a look at this.” Cannon called to Remer who was studying the bedroom.
Cannon took a seat on the couch where they had sat when they chatted with Helen a few days before. Remer joined him.
“I have a bad feeling. Where could Helen have gone?” Cannon asked.
“What about this?” Remer said holding up the pad.
“I think Helen wrote that to remind herself to tell you to look for her diary at Warm Springs. She must have a diary hidden in her room. Perhaps she wanted to show us what she wrote years ago, something to do with Karla and Karen.”
Remer nodded. ”When I get back to Warm Springs, I’ll take a look. Her room has been empty since she walked out almost 15 years ago.”
“Let’s look downstairs.” Cannon said, standing up.
Remer led the way down the steep, narrow steps that led into a low-ceiling basement. They paused in the dimness. Remer headed into the back bedroom, which was dimly lit by a single, narrow basement window.
Cannon paused and looked around, sensing that all was not right.
“Oh, God!” Remer exclaimed, turning to Cannon. “Quick, it’s Helen.”
Cannon dashed into the bedroom and stopped in dismay as he saw Helen in the corner of the room, hanging from the sewer pipe. Her face was distorted, her eyes bulged, and her head hung at a grotesque angle.
Remer looked away.
“Helen…” he said softly, and then left the bedroom.
Cannon noted the rope, wondering why an old lady would have thick rope around the house. He also saw a stool on its side, just below her dangling feet. Ostensibly, it looked as if she had made a noose, put it around her neck, secured the hefty rope around the pipe, and then stepped off of the stool.
Back upstairs, the two men waited in the living room after having dialed 911.
“She was fine when we were here, in good spirits.” Remer said, after hanging up the phone. “Why this?”
“Who were you talking to outside?” Cannon asked.  “Who was in the back alley?”
Remer raised his eyebrows.”There was a young girl in the alley, across from Helen’s fence. She was a teen, maybe 15, in a white blouse and knee-length blue skirt, a uniform.”
Cannon sat upright, attentive. “What did she look like? What was she doing?"
“She was cute, medium height, slender, red hair in a pony tail, but she just stood staring at Helen’s house. I asked her if she needed help, and she smiled at me. It was odd, when she smiled I felt rooted. Then you called and I turned away.”
Cannon got up and hurried out of the kitchen door and crossed the back yard to the fence, but the alley was empty. Remer pointed to the spot where the girl had stood.
“Just staring…she never said anything.” Remer commented. “You’d expect a girl that age to turn away, or say something.  And what a look she gave me!”
Cannon ran his hand through his hair and looked up and down the alley, but she was gone. He knew who it was. But why was Rachel here and what did she want?
Cannon sighed and led the way back toward the house.
In the distance, they could hear the police siren and the two men walked around to the front of the house and waited in the yard.
“But why this, why would Helen hang herself?” Remer asked with a confused look. “Helen was tired when we left her last week, but she was looking forward to seeing our lawn plan.   Why would Helen kill herself?
“I don’t think she did.” Cannon responded.