An Incident at the Stanley Hotel, Estes Park, Colorado 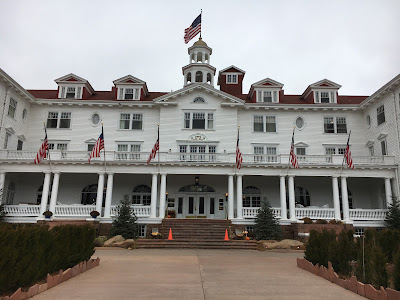 The room was pitch black, save for a moonlight beam streaming through the window. Suddenly, there was movement to the right and Wicker sat up, a chill running down his spine. Something was in the corner.
That nightmare had been repeating lately and as Wicker was visiting in Boulder Colorado he decided to travel to Estes Park and stay a few nights in the Stanley Hotel, one of America's most haunted lodges. Perhaps a few nights  where it all began would serve as a cure.
A year ago Wicker had met a client at the Stanley, a veiled woman in black, who had an assignment for him. He was to meet her in Boulder and escort a 12-year old girl named Lilly to Moab, leaving her at sunrise under Wilson's arch, south of town.
The pay was high and up front. The woman said she would trust Wicker to deliver the girl, no questions asked. An unusual request for Wicker, whose assignments normally were targets meant to vanish which he arranged with consummate skill. Escorting the girl to Moab and leaving her at Wilson's arch for top dollar was a "gimme".
Taking charge of Lilly had been effortless and they started the drive to Moab mid-morning. Wicker had a reservation at the Best Western where they would stay the night, two queens as he did not want Lilly out of his sight. His reputation and the money were at stake. Along the way they stopped in the town of Rifle at a Shell for gas and went in the food mart for a break. Lilly was quiet but seemed at ease and Wicker noticed he was getting attached to the green-eyed girl. Later in Moab they had a light meal and then to bed as they needed to rise early in the dark morning.
Wicker fell asleep, a nagging concern about leaving the girl under the arch. In his sleep Lilly spoke to him..."Not to worry." She whispered. "I am going home. But I will return...I promise I will come back for you." He awoke with a start and looked at the other bed. But Lilly was there with her back to him. Had it been a dream? That next morning they departed in the chilly predawn. He parked at the cutout macadam and led the way in the dark with a flashlight. They paused under the arch and Lilly squeezed his hand nodding for him to leave her. Wicker returned to his vehicle and looked back as the sun rose over the Eastern horizon. He searched the arch for his charge, but Lilly had vanished.

It was a crisp fall day when Wicker arrived in Estes Park, having replayed in his mind the event of a year ago. He found the Stanley majestically perched on a ridge, parked his car and went to the reservation desk where he was given room 313 on the upper floor. He then took the afternoon hotel tour which included visits to the closed billiards room and the dining room, including a stop upstairs outside room 217 where Stephen King spent a fall night, conjuring the outline for The Shining. It was the same room where Jim Carey supposedly bolted, refusing to say what had spooked him. Wicker had an early dinner, enjoying a rib eye and a bottle of Colorado Bookcliff Ensemble, a tasty blend of Merlot, Cabernet and Malbec. Slightly woozy, he then retired to his room.
Wicker fell into a deep sleep, but awoke suddenly in the dead of night. A moonbeam touched his bed and to his right there was movement and he sat up. Someone was in the corner of his room. It was Lilly.

The desk clerk looked up from his computer and was startled to see a thin woman in black with a veil and a young, tow-headed girl standing before him.
"We want to check out." The green-eyed girl said, placing the key to 213 on the counter. The clerk checked his computer and confirmed their identities. "I hope everything was in order." The young man said unctuously as he eyed the couple in front of him; the older woman was motionless and quiet.
"Yes, it was fine." The young girl responded. "But there was an incident."
The clerk raised his eyebrows and leaned across the counter. "A problem?" He asked. "Yes, last night there was noise above us in room 313. It sounded like someone was scratching on the wall with their fingernails. And then dragging a trunk across the floor. I was about to call the desk, but it stopped."
Smiling at the girl, the clerk slowly nodded and then checked his register. "Let's see who was in 313." The man offered, pecking at his computer. He stared and then frowned, looking back at the pair.

"That room was unoccupied last night." The clerk said.
Posted by Tom Reese at 3:10 PM No comments: