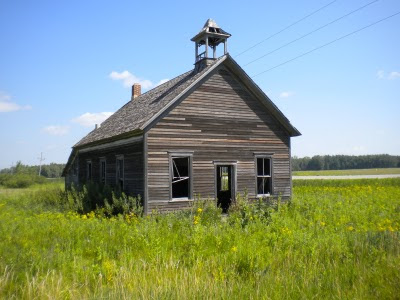 Ethel Myrin Saunders met the devil when she became the new teacher of the one-room school house on the North Dakota prairie at Kellys Slough.
On her first day, she had the students introduce themselves and Miss Ethel was struck by Cassie Natas; there was something disturbing about Cassie.
After a week of teaching, Betsy Saunders came to Miss Ethel. Betsy told her she had a bond with Cassie, who had sworn her to secrecy. And the secret was that Cassie was the devil. If she betrayed Cassie then Betsy would die.
The day after Betsy told Miss Ethel that Cassie was the devil, the two girls were standing beside the highway. They watched an eighteen-wheeler roaring down the road. Clyde was at the wheel and he could see the two girls standing by the road. Cassie had challenged Betsy to stand firm as the big Peterbilt truck roared by. Clyde saw the girls were too close to the road and hooted his air horn, but the girls did not budge. He roared by and tipped his hat. At that instant, Cassie flung Betsy into the the truck's path, and the great Peterbilt impaled Betsy in its ferocious grill. Fifty miles down the highway, the State Patrol pulled Clyde over, telling him there was a dead girl in his truck's grill.
Of course, Miss Ethel knew what happened, and she sought retribution by poisoning Cassie's afternoon chocolate milk, a gift of the school lunch program. At 2PM when the students took their milk break, Cassie calmly sipped her poisoned chocolate milk. After a minute, Cassie stood up and snorted. The other students gasped as Cassie went through a transformation, her lower body metamorphosed into cloven hooves and a woolly form, the upper body was a magnificent chest with a huge head, adorned with pointed horns.
The students screamed and ran pell-mell out of the school house. Miss Ethel stood her ground and the monster breathed fire on Miss Ethel, not disfiguring or killing her, but blanking her mind forever. Then the monster bounded away into the corn fields.
The townsfolk cared for Miss Ethel, but she never spoke again. Cruelly, Miss Ethel lived to over 100. The old school house was left as is. Some of the newcomers urged the town declare the quaint structure an "Historic Building". But the older residents demurred.
Today the little school house stands as an oddity along Route 81.
Posted by Tom Reese at 12:01 PM