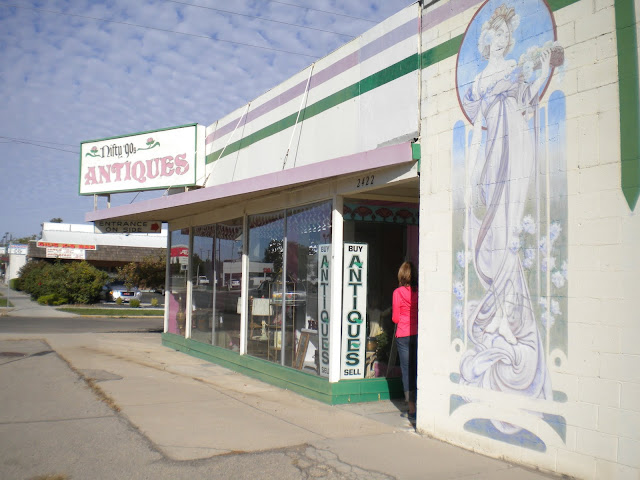 Samantha turned the key in the lock and Willy appeared out of the morning shadows, pushing her into the antique mall and coffee house. Sam was terrified as she stumbled into the dark shop, but when she turned to to face the intruder, her fear evaporated. The young man was tall and thin, wearing a baseball cap, nervous, obviously diffident.
"I stumbled." Willy explained in a high voice.
Sam relaxed and looked longingly at the coffee corner. "We don't open until ten." Sam said, hoping to shoo the stranger out the open door of her antique and coffee shop.
Willy nodded and explained that he wanted to buy the mannequin, pointing to the posed, young woman planted by the window. She was blond, blue eyed, and wearing a period-prairie dress.
Sam was taken aback. She explained they sold antiques and coffee, and she doubted the owner would want to sell the mannequin, which was part of the decor of her antique display booth. But Willy pleaded, looking dreamily at the still mannequin. "Lydia is my soul mate."
"Lydia?" Sam asked, raising her eyebrows.
" Please, there is no harm to try."
Later that day Sam approached the owner and to Sam's surprise the owner agreed to sell the mannequin for $150. But not a penny less, $150 firm. Willy returned later in the late afternoon and he agreed, but with payment conditions, asking that Sam and her colleague, George, deliver the mannequin to his rooming house three blocks away.
The next day Sam and George drew stares as they carried the naked mannequin down the street to the Greystone Hotel, a once grand palace, now a rundown, long-term boarding house. They entered the dark, seedy building and slowly climbed the three floors, the stairs lit only by a single long, blue neon light. They knocked and Willy immediately opened the door. One moment Willy was happy to see them, but the next he was aghast that Sam and George had carried his precious mannequin naked through the streets.
They entered the room and on one of the twin beds in the room was an outfit consisting of a demure charcoal suit and a white blouse, including lacy red under clothes. Willy proudly showed them the mannequin's new outfit. Lydia was starting a new life.
Willy paid them in cash and Sam and George, feeling uneasy, quickly exited. George started down the hallway, but Sam lingered a moment as she heard excited voices. Putting her ear to the door, she heard Willy's high voice. Then the soft voice of a girl. George motioned for Sam to come and was startled when Sam joined him. "You look like you've seen a ghost." George said.
Sam shook her head and they both ran down the dark stairway to the street level. They pushed open the big, heavy door and emerged with relief out into the sunlight, pausing to look up at Willy's windows. A young woman in a charcoal suit and white blouse stared down at them. She raised her hand to her lips and blew them each a kiss.
The next day Samantha and George did not show up for work. Wags said they were an item and had eloped. They are now officially reported as missing.
Later that week, the police retraced their steps to the old hotel. The day after Sam and George's visit, the manager recalled the young lovers coming down from the third floor for breakfast. The couple ate, returned upstairs for an interlude, then checked out at noon, thanking the manager for the service and fine food. Then Willy and Lydia vanished.
(Contributor, Sherry Gorrell)
Posted by Tom Reese at 3:15 PM