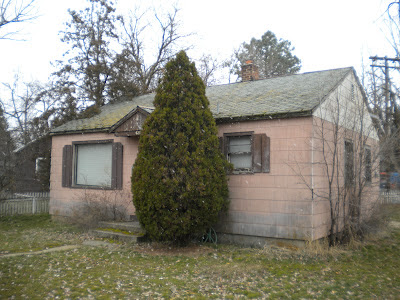 The minute Jeb stormed out of the house in a rage, Sue called Gary and said she was ready to go. She had to vanish, get away before Jeb demonized her. At first she thought he was descending into madness. Now she was convinced her husband was the Devil.
The runaways headed west, settling eventually in a pink cottage in East Boise, Idaho. Gary, her savior, was an attractive craftsman and easily found work in Boise. Sue’s vanishing from her Utah home created a national sensation, going viral and making cable news. Back in Utah, Jeb was suspected of killing her and secreting her body in the nearby Wasatch Mountains, perhaps the Topaz Mountains in Western Utah.
Some months after the couple had run away and with the police hounding Jeb, her distraught husband killed himself. But Sue knew it was a ruse. When the house burst into flames, Jeb had exited out the back door. Some poor soul, perhaps a homeless man, had been discovered in the  ashes. The family, part of the conspiracy, claimed it was indeed Jeb's remains.
Sue stayed at home in Boise and did telemarketing as she had a sweet, seductive voice. One March day on a gloomy Pacific Northwest morning, Sue listened to the drumming on the roof, watched the rain steaks on her windows that looked out on the brown foothills of the Sawtooth Mountains. "What's wrong with this picture?" She thought.
Shaking off the gloom as the weather improved, Sue began to jog the Greenbelt that tracked the  gray-green, swollen Boise River. Maybe she was wrong about her husband. Jeb was not Lucifer, not immortal; perhaps it had all been a misunderstanding.
A bike zipped past Sue as she padded along the trail. She looked ahead and watched as the biker paused at the pedestrian bridge. He was tall, lanky and wearing a helmet with dark glasses. The biker looked back at her and smiled. Sue gasped. It was her husband,Jeb.
A few weeks later, Rosie Greef stood at the pink bungalow's front door and rang the bell once again. Rosie was short, rotund, with flaming red hair and small blue, darting eyes. Her tenants were two weeks behind and a young, mysterious couple tardy with the rent was a warning. She tried the bell, then took out her key and opened the door into the dark living room, calling out softly.
Rosie paused as her eyes adjusted. There was someone one beyond the living room standing in the bedroom door. She opened her mouth, but then clapped her hand to her face. It was a dangling body, hanging through the pull-down door that led to the small attic.
Today the cute, pink bungalow in East Boise is on the market. There are odd stories that the girlfriend vanished and her boyfriend hanged himself from the attic.There are murmurs of spirits, so the house sits forlorn and empty, waiting for the next tenant.