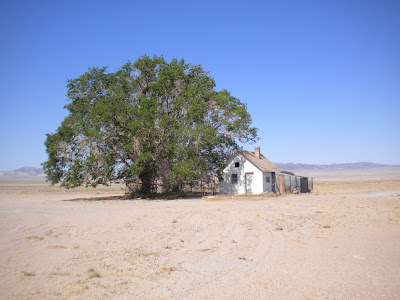 The storm troopers were at the door. Fred and Nora Byrnes cowered inside their cabin under the ancient cottonwood in the Great Basin Desert. Was this visit an incident, or a settlement? Vince, a powerfully built man in his 50s, along with his comely, blond partner were at the door. Kristine knocked once again, harder this time.
“Leave us alone!” A shrill woman’s voice echoed from the cabin, then after a brief wait a white-haired, stooped man opened the door. The old man stepped back with a sigh of resignation and let the troopers enter the cozy cabin, which was more comfortable than it appeared from the outside.
The elderly couple retreated to the couch and sat down, holding hands, looking apprehensively at Vince. Fred glanced at Kristine, who stood akimbo.
“You are out of the circle.” Vince began, and then launched into one last incident speech about the common good and how Fred and Nora had to return to the circle where they could be monitored. Vince droned on about government health care services, recreation, entertainment and cultural events, to name just a few of New Forward’s cradle-to-grave offerings in the circle, including thought scanning that could avoid untoward events.
Fred snorted and Nora looked up sharply. “We hate New Forward.” She spat. “Why can’t they leave us alone, let us live in peace? Like the old days.”
Kristen cast a sideways glance at Vince. What was wrong with these old fools?
“You have a place in the circle.” Kris tried. “Everyone is equal; there is no discrimination, no more inequality, and no poor people.”
“And no more wealthy people either!” Nora snorted.
Vince took a breath. He understood why he and Kris had come for a settlement. An incident was a  planned reasoning process. A settlement was final resolution.
“Who misses the wealthy?” Vince asked. “The wealthy who didn’t understand the New Forward philosophy were sent to re-education posts and later settled in the circle. Those who resisted, well…” And Vince let the sentence hang.
“Even overweight people and smokers. Our friend Carl.” Fred protested.
“It’s for the greater good.” A fit and slender Kris explained that anyone with a body mass greater than 25% was shipped to a Training and Nutrition Program for exercise and proper eating. Most went cheerfully, she noted.
“But our friend Carl never returned from the program.” Nora hissed.
There was a silence while Vince and Kris exchanged a look.
“And you put smokers in a reservation, just like the Indians.” Nora said.
Vince sighed and explained that smokers were sent to the corral, not a reservation and it was temporary once they demonstrated they had given up the vile smoking habit, which cost society billions each year.
Changing the subject, Kris asked. “Why didn’t you apply to the Board for approval to visit in the desert? They might have granted you a couple of weeks at your Great Basin cabin.”
Kris went on to explain that the Government Board was open to reviewing deviations and travel requests.
Fred shook his head, muttering to himself.
“Those half-wits?” Nora asked fiercely. “I wouldn’t dignify the Board’s existence by asking them to go pee.”
“How did this happen?” Fred moaned, putting his head in his hands.
“It was the election. We went to sleep and woke up with the New Forward.” Nora answered.
Vince took a step back. Clearly, Fred and Nora were beyond redemption. So a settlement was in order. And it would be Kris’s first. Was Kris up to it? She certainly seemed the part: at times cajoling, other times bullying, but always tough.
Holding up his hand for silence, Vince noted that he and Kris would call the Board. Perhaps something could be arranged. He politely told the couple that he and Kris would step outside.
Fred’s eyes widened and relief flooded over his face. But Nora’s eyes narrowed and she bit her lip, suspicious.
Vince looked around. It was lovely in the late afternoon. The cabin faced east and the declining sun bathed Utah's San Francisco Mountains in a soft light. Occasionally, there was a glimmer as the sun touched a tin roof in Frisco, the old mining town.
“You ready for your first settlement?” Vince asked Kris who was staring fixedly at the cabin.
Kris nodded, took a breath and walked back to the front door. She squared her shoulders, undid the flap of her weapon and went inside.
Minutes passed and Vince could hear voices. Suddenly, Fred’s voice was loud, a shrill scream from Nora.
Two heavy shots boomed across the empty desert.
Vince let out a breath and dug at the sand with his foot. He looked up as Kris came out, her gun hanging in her right hand, which was shaking. He was startled to see tears streaming down Kristine’s cheeks.
“We can’t just leave them like that.” Kris said, her voice shaking.
Vince frowned. “Don’t fret; the cleaning crew will be here tomorrow morning.
“All night?” Kris protested. “It’s not right.”
“The crew is union. No work after six in the evening.”
Kristine sniffled and put her hands to her face. Vince watched and shook his head. She was not as tough as she appeared. This was Kristine’s first and last settlement. She would never go further than an Incident Team.
Today Fred and Nora are buried in two simple graves facing east, which allow a glimpse of the fabled Frisco mining town in the setting sun. The cabin by the cottonwood tree is ramshackle and empty.
After all, the place is outside the circle.
Posted by Tom Reese at 2:36 PM