A Blue Light at the Wildcat Diner, Paucah, Kentucky 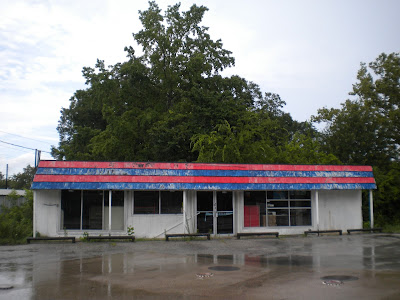 ﻿
﻿The unholy trio entered the Wildcat Diner where Alex and Sarah were in the last booth studying menus. Ricky waved his gun. Kenny hitched up his pants, and the flame-haired Lulu pulled out a snub-nosed revolver.
“This is the greatest day of your lives. It’s also your last,” Lulu yelled.
She covered the five customers in the booths, while Ricky and Kenny tied up the cook and the two waitresses. Kenny stepped to the register and grabbed the bills. Ricky went from customer to customer, taking jewelry and wallets.
In shock, shy Sarah glanced out of window and was startled to see an intense blue light among the trees. To her amazement the light flew across the road, through the window, and enveloped her. Ricky and Kenny missed Sarah's encounter, but Lulu saw Sarah glow for a few seconds in a strange blue haze. Lulu blinked and shrugged it off; probably the meth.
After securing the employees, Ricky ordered Sarah out of the booth and to the storeroom for "quality time".  Alex flinched, but Lulu put her gun to Alex's head. Sarah, now eerily calm, obeyed Ricky.
As soon as they were in the storeroom, Ricky pocketed his automatic and gestured toward the cutting board table. Sarah smiled and sat back on the slick wood stand. Ricky bent forward to pin the young woman’s arms. Swiftly, Sarah grabbed Ricky by the throat. She squeezed until his eyes bulged, Ricky’s breath wheezed like air out of a balloon. Sarah sat up, letting the limp body slump to the floor.
There was a light tapping and then storeroom door opened cautiously. Kenny peeked in, squinting in the dim light, “My turn?"
Sarah took a meat cleaver from the cutting table, beckoning to Kenny, and then burying the blade in his forehead. She reached down and took Ricky’s pistol, then returned to the restaurant, where Lulu was watching the other customers.
"Where‘re my boys?" Lulu asked Sarah.
"The boys are dead." Sarah replied. And she fired three shots into Lulu's chest, the red-haired girl falling without a word.
Sarah went to Alex who was standing, his mouth agape.

"Time to go." She said, putting the gun in the back of her jeans.
Alex and Sarah left the diner, got in their car, and drove away.
Later that night the customers gave conflicting descriptions of the couple to the police. One remembered the blue light enveloping Sarah, but that stretched credulity. No one thought to get their license number.
For a time, the Wildcat Diner was a local legend and it flourished with a Wednesday Blue-Light Special.
But overtime the legend dimmed and today the diner is dark.