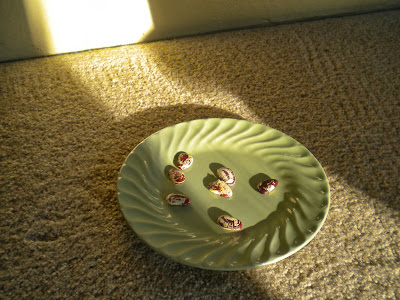 The ghost appeared out of the dark and stood in my headlights, her right thumb extended… a hitchhiker. I stopped and peered at the young woman dressed in a white, high-collar prairie dress. She had short blond hair that cupped her heart-shaped face, big cupid lips and wide brown eyes.
I was leaving the truck parking area where I had paused to gather myself after Tasha spooked me at the Little America Motel. Slowly pulling forward, I rolled the passenger window down and leaned over as the girl came to the window.
“I need a ride.” She said with a smile.
Explaining I was going as far as Laramie for the night, she nodded and without pause clutched the door handle. I clicked the doors open and was startled when a young man dressed in an army field jacket appeared, opened the rear door, threw in two back packs and then climbed in. He was medium height and thin, with a long face and a stringy van dyke beard. The young man stared straight ahead mechanically, not speaking or moving.
“My keeper.” The girl said motioning toward the back as she climbed in, putting her arms to her chest and shivering. I paused, were they dangerous? Could they be connected to Tasha and my search for Embry Hamilton? Or was the conspiracy just my imagination?
“You’ll be fine.” She laughed, as if reading my mind. “We’re just on the road.”
We exchanged names and she told me her name was Ariel, no last name, just Ariel. We chatted about the cold weather, upcoming Thanksgiving, and I subtlety tried to find out more about them, but she avoided direct answers. It was another two hundred miles to Laramie and I planned to find an economy motel on the north side of town. My two hitchhikers looked tired, so I offered to get them a room at the motel, but Ariel demurred, saying they would get out on the Laramie outskirts.
After a quick two hours Ariel pointed at a looming Pilot truck stop, so I exited the interstate and pulled into the sprawling complex. At 3 in the morning, the place was still functioning, a haven for the night truckers. I stopped and watched as Ariel’s companion unloaded their back packs and stood waiting rigidly. Ariel looked at me, touched my cheek, and handed me a small, rectangular tin.
“Use them sparingly.” She said and then got out, joining her friend. I pulled ahead to the exit and took a left turn, then looked over, expecting to see them trudging toward the main building. But they were gone.

Later I settled into an economy motel room, away from the interstate. I sipped a bottle of Deschutes River Ale, thinking about the hitchhikers, and then I recalled my trip to Vegas and the girl I dropped off a few days ago on the Nevada extraterrestrial highway. She had told me about parallel universes and travelers. Were Ariel and her keeper travelers?
I remembered the tin she had given me and took it from my shirt pocket. It was quite elaborate, painted a midnight blue and festooned with stars. An unpainted line divided the top in halves, a similar night sky on the right side, but different. Did the cover represent similar, but different universes?
I opened the tin and gawked in surprise. I gently spilled the contents out on a kitchenette plate and poked them with my finger. They were kidney shaped, an odd brown and white speckle, perhaps a quarter of an inch in length.
“Use them sparingly.” Ariel had ominously directed
Were they magic beans?
Posted by Tom Reese at 7:12 AM