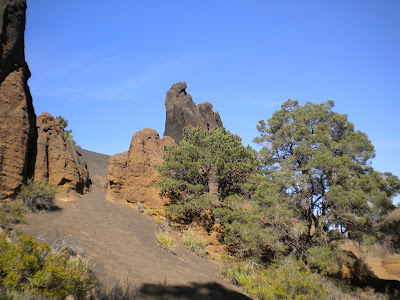 A small group of adventurers stood at the foot of the Red Mountain cone, gazing at the hoodoos and odd mineral crystals that erode out of the jagged walls. Hugh, their leader, told them to wander as they pleased, then rendezvous in an hour. He urged members to be on the lookout for bobcats, which were often seen in the area. Hugh reminded they would get an early start the next morning and spend the day scouring the area for evidence of the supposed devil and his lair.
Bruce detached himself from the group and wandered off, climbing along the slippery hillside slope. The sun was at his back and shone on the northeastern side of the cone. He walked cautiously, taking pictures of the various formations, the sunlight casting eerie shadows.
Pausing, he snapped an interesting gargoyle-like formation in the distance, noticing an odd figure at the rock base. Bruce quickly advanced his telescopic lens to study the rock and image, but to his surprise, the figure rose and vanished among the Ponderosa Pines. Perhaps the bobcat?
Later Bruce met the rest of the group, but kept quiet about what he had snapped among the weird-shaped rocks. He was a breakfast speaker the next morning at the White Buffalo Inn where they were staying. His task was to present the Hualapai history of the devil legend. Bruce was excited to end his presentation with the hoodoo picture and the gray presence at the formation’s base. He would let the group conjecture on exactly what was in his picture.
They made their way back to the parking area and climbed into the van. Bruce sat in the back as the vehicle moved to the two-lane highway. He looked back and was surprised to see a face peering at him from the juniper brush. Quickly Bruce raised his camera, but the figure ducked away.
That was no bobcat.