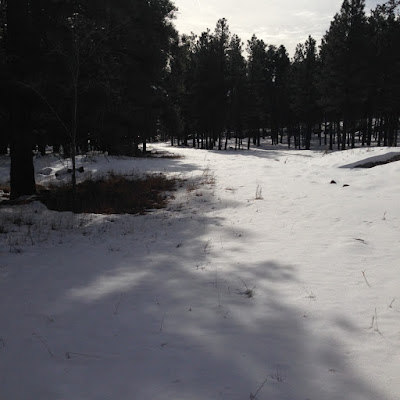 The young lovers hesitated at the fork in the pine forest. Skyler explained that the road to the right was less traveled. Tara laughed and took her friend’s hand saying she felt adventurous and wanted to explore the forbidden way. Skyler nodded and they headed down the snowy path deeper into the woods. Tara strode boldly ahead while the athletic Skyler hung back, looking around as if fearful of something in the pines. Tara, of medium height with dark shoulder-length hair and large, brown eyes, felt excitement as she listened to the wind in the trees.
Smiling back at her friend with his short blond hair and his sparkling blue eyes, Tara was pleased with their budding relationship. Proceeding slowly on the road they came to clearing with a lone, tall and straight ponderosa pine. Tara noticed Skyler appeared wary and then she saw movement ahead in the forest. To her shock he grabbed her hands and secured them behind the pine. Other men emerged from the forest and tied Tara to the tree with a heavy rope. The movement was so sudden that Tara was speechless.
Skyler looked at her sadly while the men in white parkas and hoods stayed in the background. ”It’s January and time for the biannual sacrifice.” He said, explaining that since she lived alone with her invalid grandmother, the village had selected Tara for the biannual offering. And so they had staked her in the clearing and would leave her as tribute for the snow beast, guaranteeing another two years of peace for the village.
“You don’t know.” Tara said, regaining her composure and Skyler hesitated, staring at her. There was something magnetic about Tara that had attracted him when she first moved to the village, something that radiated from her dark eyes. It was too bad she was chosen for the offering.
“Last year I was hiking at Jacob Lake and I fell through the ice and drowned. I died.” Tara related.
He raised his eyebrows, but she shook her head. “I was lucky and I made a pact. I was able to return from the dead with powers.”
Stepping back, the young man laughed at the fanciful story. “ You made a pact with the devil?”
“With a demon.” Tara answered.
Skyler’s blue eyes narrowed as he studied his friend tied to the pine tree; the snow beast was probably lurking nearby. Suddenly, he heard a rustling in the pines and a low growl. Time to leave Tara to her fate.The group of men backed to the edge of the pine forest and called out to Skyler who gently touched Tara’s cheek. She was already changing and Tara snapped at him. He jumped back shaken and hurried to join his friends. They paused in the clearing, once again hearing the snow beast’s menacing growl. Forbidden to watch, the group headed to the main road and back to the village.
When the men were gone Tara breathed deeply and slowly tensed her muscles. As her body swelled, she let out a howl that reached the village men who froze, and then began quick stepping home.
With her increased strength, Tara snapped the wrist ties, and then broke the heavy rope that had secured her. As she brushed her binds away, Tara saw a white, furry face peer at her from a pine tree. The creature’s eyes were yellow and fangs protruded from the beast’s ferocious mouth. Tara took a step forward and stared into the curious eyes of the beast who hesitated. She hunched over, snarled and spit, flashing her elongated teeth and leaping forward in a threatening manner.
The snow beast backed up, turned and loped away through the pines. Tara watched her adversary disappear into the heavy forest, as the creature sought another village to terrorize. She slowly returned to her shy-girl form, brushing her hair from her eyes. Her first impulse was to return to the village for vengeance against Skyler and his friends. But she hesitated, there were towns to the east, even a city. The village could wait while she explored.
Their time would come.