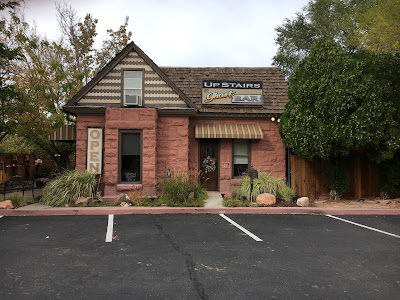 A haunting was the last thing Rollins expected when he visited the Jeffery Steakhouse. Traveling from Scottsdale to Boulder, Colorado to visit friends, he had decided to stop in Moab and recalled a colleague recommending Jeffery's.
He made the short walk from his motel to the upscale establishment and found the small dining room crowded.The pert hostess brought him a glass of Merlot and suggested he wait in the cozy lounge upstairs.
Rollins settled on a circular couch and set his glass on the coffee table. To his surprise a voice sounded out of a dark corner. A woman in a dark dress was sitting by herself in the shadows, they were the only two in the upstairs bar.
"I'm reminiscing." She said and beckoned to Rollins. "Come join me." He took his glass and headed to the corner, appraising the young woman who had dark hair, her face covered by a veil attached to her hat. As he neared her, he thought of funeral, that perhaps she had been standing by a grave. A country song floated through is mind, the tune gone, but lyrics came back, something, something,the woman in a long black veil.
Rollins sat down and they clinked glasses, introducing themselves. "I'm Lilly." She said with a nod. "I can use some company." They traded small talk and Rollins explained his trip from Scottsdale to visit people in Boulder. He noted a friend had recommended Jeffery's, so he had broken the trip in Moab.
Lilly sipped her wine and said she was on an anniversary visit, the 5th year of her husband's death at Moab. He was killed in a bungee jump from the famous Delicate Arch in the Arches National Park. "Our friend Clyde miscalculated the length of the rope and Chandler jumped to his death, headfirst into the red sandstone."
Grimacing at the image, he expressed condolences as he appraised Lilly, trying to get a better impression of her through the veil: dark hair and eyes, high cheekbones with a wide mouth and sharp chin. Although dressed in somber black, she reeked outdoors. "I read the park is dangerous." Rollins commented.
"No accident." Lilly responded. "My husband was murdered." And a cloud descended over them. Lilly took flight back to the incident five years ago. Rollins puzzled, hoping the elegant young woman would share more of her story. His thoughts were interrupted by the hostess paging him for his table, so he offered condolences again and went downstairs.
Rollins took his seat and asked the waitress to take a glass of Chardonnay upstairs for the woman in black. He was puzzled when the server returned with the glass and set it beside him. "She's gone." The waitress said.
Later Rollins returned to the motel and realized he had left his key card in his room. He asked the cheerful desk clerk for another key and she obliged, asking about his meal. He noted it was fine, but that he had heard a sad story and he related Lilly's tale.
"Oh, but you only heard half of it." The desk clerk said. "Chandler was killed five years ago.The following year Lilly and her dead husband's friend, Clyde, gathered upstairs at Jeffery's to commiserate the  anniversary of the tragic death. Both were shot to death upstairs in the lounge; police said a murder-suicide. Apparently, Clyde proposed to Lilly who turned him down.The unbalanced Clyde shot Lilly, then shot himself.
Rollins was dumbfounded at the desk clerk's story. "It was about this time of year when Clyde killed her," she said. "A Moab love story."

Later in the night, Rollins awoke to radio static. A maid had set the radio clock to go off early morning. He sighed, but at least it was not the shrill alarm or the radio blaring. As the static cleared, Rollins recognized a country western song. It was a long-ago country saga...the woman in the long black veil.
Posted by Tom Reese at 10:16 AM