The Loons on the Hidden Lake, Somewhere in Vermont 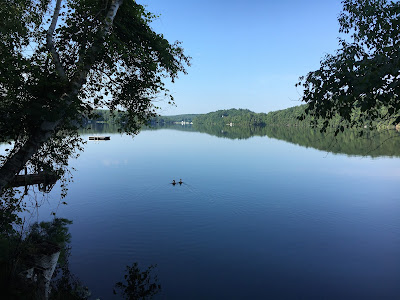 She awoke to the cry of the loon, a mournful cry of distress. Katie got up and went to the front of her Aunt's lakeside cabin. There by the wooden dock were two loons, one appeared to be tangled in a casting net her nephew had left dangling off the dock.
Cautiously she went out and approached the two duck-like birds, the one tangled and a second circling nearby, which appeared slightly bigger, probably the male. The two birds had black dagger-like bills, gray heads, white breasts, and black backs with white speckles.
As Katie approached, she made reassuring sounds and gently moved her hands up and down, hoping the loons would not fear her and startle. Slowly Katie eased down the stone-lined embankment and entered the chilly water. The sounding loon backed away as Katie approached his mate. The female eyed the young girl and called, but remained still, not flapping her short wings. Gently, Katie untangled the distressed bird from the net and gave her a gentle push out, the male gave a hoot, sounding across the lake.
The two loons circled in the water a couple of time as if to thank Katie and then swam south together toward their nesting spot.
A few days later Katie was sunning on the dock in her bathing suit. She was drowsing when a shadow fell across her face. Startled, she sat up to see Ray, the lumbering maintenance man who took care of the seven properties on the peninsula and cleared the wooded common land on the other side of the road. Katie felt a chill as he stared at her with his beady eyes. Drool seemed to drip from his small mouth. "Hello, Honeybun." He intoned in a hoarse voice. "I think we should go for a swim."
And then Ray slipped the strap of his overalls off his shoulder. He started to advance toward the the girl when suddenly a bird swooped down and hit him on the side of the head and Ray staggered. A second bird followed and hit Ray just above his left eye, sending the maintenance man toppling off the dock. Katie watched in horror as Ray fell head first onto the rock embankment. Blood gushed as his head hit a sharp rock that protruded from the wall.
Katie shakily stood and watched as the two loons landed near Ray's still body. They pecked at his shirt, then looked up at the girl and called their mournful cry. She understood they wanted help in pulling pull Ray off the rocks. It appeared they intended to drag his body into the lake. The deepest part of the lake was just 90 feet off her dock. If Ray sank, the current would take him south to the dam. Perhaps the carp would eat him, Katie thought, as she tugged Ray off the rocks into the water.
The two loons paddled with their webbed feet and Katie walked Ray's body past the dock. She then swam sidestroke pushing his inert body and the team gradually moved Ray out past the raft where he floated easier. Katie tread water as she watched the birds pull the inert body out into the deep. They circled and pecked at Ray repeatedly until he finally sank beneath the chilly lake water. Katie and the two birds looked at each other. Once again they called, a haunting sound that echoed down the lake in the late afternoon, often described as a demented person's howl. The loons then turned and swam side-by-side toward the south.

A week later Katie was reading in the cottage on a cloudy day. She started as a car stopped in front of her cottage. The young woman went to the door and stepped back as she saw a forest green and gold Vermont State Police SUV. She felt a chill as a tall, slender trooper got out and approached her. He stood on the small porch, hat in hand and appraised her, then asked if she could answer a few questions. Katie nodded and invited him in, but he declined standing on the other side of the screen door. He asked if she knew Ray Lash, the peninsula's maintenance man. Katie nodded, but said she had not seen him this week. He usually came on Wednesdays to cut the grass and clear fallen tree limbs.
The trooper asked again if Ray had been around. Could she have missed seeing him? Katie replied to her knowledge no, then she asked if something had happened to Ray. The trooper leaned forward and said: "It looks like he died about a week ago and his body appears to have been pecked by birds.
"The birds killed him?" Katie asked. The trooper shook his head. "Not really, the birds pecked him, but Ray drowned. There was water in his lungs."
Katie stiffened. So Ray had been alive when she and the loons ferried him out to the deep water. If she had known Ray was alive maybe she would have called emergency.
But maybe not.
"Have you seen anyone around here that does not belong, maybe a stranger?" The trooper asked. Katie shook her head. "Have you seen anything this past week, maybe something out of the ordinary?" The lawman queried." Katie paused, then shook her head. "Only the loons" She responded.