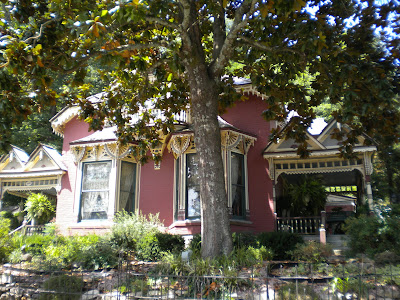 Previously, Elina and Averil Quicksilver had to leave New Orleans, and then flee from the Natchez Trace in Mississippi as Sam Bradford, a wealthy Louisiana deal maker, relentlessly pursued the mother and daughter, hiring assassins to kill them. The two psychics knew that Sam had murdered his wealthy wife.
After escaping from the Natchez Trace, Elina and Averil settled in Eureka Springs, Arkansas, known as a spiritual and healing center in the Northern Ozarks. Elina perceived positive energy in Eureka Springs, so they bought a Victorian house on a hill, establishing the Eureka Psychic Center.
The many ill travelers seeking the curative waters of the "Basin Spring" often found their way to the Psychic Center to learn their way to a more prosperous future.
After a few years Sam Bradford, now sick with the cancer, traveled to Eureka Springs to take the Basin waters cure. After having soaked in the magic baths and drunk the bottled basin spring water, Sam felt better and was upbeat. He decided to stay in Eureka Springs for a few days and sent his servants back to New Orleans.
One night on a whim, Sam visited the Psychic Center for a read. He disappeared into the gingerbread house, but never emerged.
Sam Bradford is reported missing.
Posted by Tom Reese at 6:25 AM