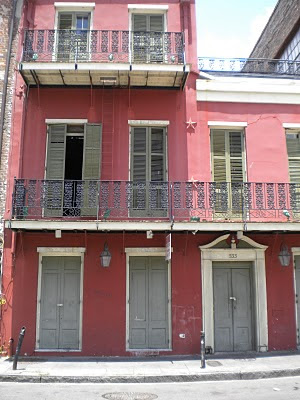 Sam Bradford left his Canal Street office to wander one summer evening. He found himself ringing the doorbell of 766 Rue Toulouse, a stylish townhouse in the French Quarter. A young girl with startling green eyes opened the door, "We have been waiting for you." She said.
The girl grabbed Sam's wrist and pulled him inside; Sam noticed she had an extra finger on both hands, a six-fingered girl. She led him into the hallway, then steered him into a shadowy room where a woman of 30 or so sat at a round table. The woman nodded for Sam to have a seat. Ice tea was set at his place; they had been waiting.
Sam sat down across from the black haired woman, who appeared to be of American Indian blood. She took his hands and held them tightly and let out a breath:
" You did a bad, bad thing. You drowned your late wife, Alice Lacount." She said laconically.
Sam gasped and his blood ran cold. How did this crackpot know?
The  psychic shook her head. " No matter to me. We have a different message."
Suddenly the girl sitting off to the side chirped, " Sell. Sell everything!" The woman dropped Sam's hands and looked at him with dark eyes: " Five dollars, please."
Sam paid and hurried back to his office. Nonsense, he thought. But that night Sam called his broker and told him to sell all his stock market holdings.
Two days later on June 25, 1950, the Korean War started and the market crashed. Sam bought back at the bottom and made millions. He owned it all to the crazy psychic and the weird girl.
But they knew Sam had taken Alice behind the Orchard Mansion for her last visit with the Cane River that fateful night.
Something must be done about the psychic. Perhaps a fire.
The original townhouse burned completely, but no bodies were ever discovered. Sam later donated money to the city to rebuild the townhouse. Once rebuilt, the city leased the ideally located building to various businesses.
But no one has ever succeeded at 766 Rue Toulouse in 60 years.  Yet, hope springs eternal.
Posted by Tom Reese at 4:26 PM