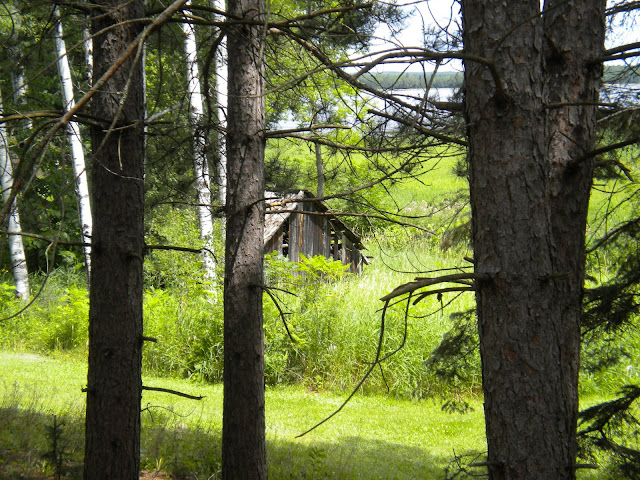 The Joshua Carson survey party trekked into the forests in November in the early1900s to survey acreage for logging. Joining Josuha were Bill Sutton and Jack Pine, who was Joshua's cousin. The survey team found an old hunting hut, which they could use as a hub for their survey of the area between Moose and Cass Lakes.
Unfortunately, the weather turned cold and cloudy with the threat of an early snowstorm. Perhaps due to the desolate swamps and the threatening weather, Joshua made a mapping error, showing Cass Lake a half mile further west than it was. Maps would indicate 144 acres of prime, towering pines as underwater. The voracious loggers passed them by, and this area became a National Heritage, known as "The Lost Forty".
During the survey work, Bill Sutton developed a plan. Bill was number two after Joshua in the survey company, and Bill also lusted after Joshua's striking fiance, Betsy Gilbertson. Bill Sutton promised Jack Pine a full-time job if Jack threw in with him.
The plan was for Bill Sutton not to return, inexplicably lost in the unexplored wilderness, perhaps a victim of the creature that the Ojibwe Indians claimed roamed the lakes and the dense woods. Nearing the end of their survey, they returned to the hut in single file in a falling snow. Bill pulled out his pistol to shoot Joshua who was in the lead. But Joshua was gifted with a sixth sense, and he whirled around and buried his hatchet in Bill's chest. Jack Pine, bringing up the rear, shot Joshua in the forehead. Joshua fell in the new snow eyes wide, staring at Jack.
The snowfall developed into a raging blizzard, and Jack pulled the bodies to the side of the hut. He hunkered down in the hut for the cold night, thinking of his story and what to do with the bodies. In the morning, Jack surveyed hiking out, but the four feet of wet snow discouraged him and Jack retreated back to the hut.
As Jack huddled by the fire, his mind raced: -was he trapped for the winter? Surely the snow would let up and he could find his way back to the wagon trail. The wind howled and Jack felt a presence, as if something was outside. He saw movement at the hut's small window; or was it just the swirling snow? Jack spent a second restless night with fitful dreams of his two dead friends.
In the morning, it was still snowing and Jack went outside. He saw the forms and brushed away the snow. But only Bill Sutton's body was there with the hatchet protruding from his chest. Joshua's body was gone.
Who or what took Joshua's body?
Jack went inside and surveyed his supplies, only a bit of pork, beans, and dried apples remained. The snow was now over six feet deep and relentless. Jack dragged Bill Sutton's body inside the hut. Jack could not let the creature claim Bill's body. It was going to be a long, long winter.
In the Spring when a survey teams finally hiked into the area, they found Jack Pine, fit and well, but Jack's mind was gone. There was no trace of Joshua Carson or Bill Sutton.
Jack Pine was confined in the St. Peter State Hospital for the dangerous insane. And the lost forty hunting hut stands empty.
Posted by Tom Reese at 7:52 AM