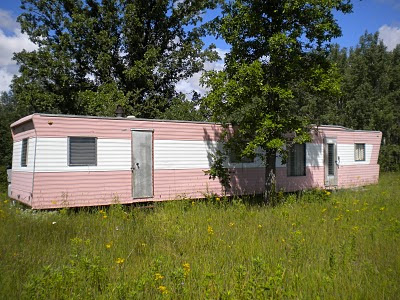 Randy Ryte and Marisa Marvell learned about the Leech Lake Creature when they were conducting doctoral studies on timber economics at Bemidji, Minnesota.
Finished with their PhDs and having been hired for the fall at St. Olaf College, they decided to research the creature. They leased a pink single-wide trailer on a farmer's plot off Route 64.
One evening they went for a walk and came upon the charming Forestedge Winery. Randy and Marisa strolled down the driveway and they found Lane Swanson relaxing on the lawn enjoying a chilled bottle of his famous Rhubarb Wine. Lane waved them in to share a glass.
They chatted and when Lane asked what they were doing, Marisa explained they had come to seek the  Creature.
Lane fell silent and a cloud descended.
Randy and Marisa were uneasy, and Randy changed the subject. Marisa complimented the distinctive fruit wine. Lane was pleased and detailed the history of the Forestedge Winery. Lane went for a second bottle, which Randy insisted on buying. After a few more glasses, Lane relaxed.
Lane told them the Lake Leech Creature rumor had been extant for as long as the locals could recall. No creature was ever seen, or heard. There were no pictures, not even pseudo creature pictures. Yet the rumors persisted.
He went on to describe two incidents in the past five years. The first was a State Police-University of Minnesota investigation five summers ago when students and volunteers came to scour the perimeter of the lake; they deployed a deep water submersible to search the lake bottom. Nothing turned up.
More disturbing were the Blackwell girls, who came three summers ago and announced they were going to camp and search the lake, seeking evidence of the creature. The Blackwell girls vanished.
Randy and Marisa listened silently in the fading summer twilight. Then Marisa said: " What if the creature exits in time and not place."
The two men looked at her. Marisa went on to say how the three of them existed in a place in linear time.
For example, Marisa explained, this evening they were together. Tomorrow morning she and Randy would be in the pink trailer. Lane would be at the winery. And in linear fashion the day after tomorrow they would be in a place and so on, linear. But what if the creature could go backward and forward in time?
The two men coughed and smiled. But Marisa continued. She ventured that when the university expedition came with fanfare, volunteers, and boats, the creature went ahead in time to what it meant. The expedition meant nothing, so the creature let it be.
Perhaps the Blackwell girls stumbled over the creature, and the creature could see they would cause great grief, so the girls vanished.
"Too much Forestedge wine," Randy laughed.
Randy and Marisa waved goodnight to Lane, taking his card if they needed assistance and walked back to the pink trailer.
Just as Lane was set to go to bed, his cell phone rang. He answered it and heard Marisa scream:
"It's here! My God, it is here and so..." then the phone died.
Lane loaded his shotgun and jumped in the pickup and roared over to the pink trailer. He captured the trailer in his headlights and approached cautiously. The trailer lights were on and the two doors wide open.
But Randy and Marisa were gone.
Posted by Tom Reese at 12:58 PM