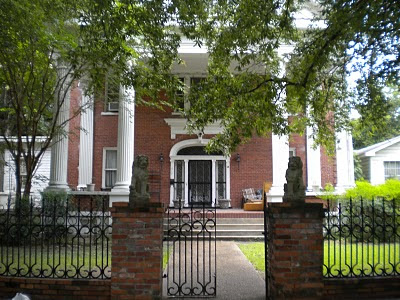 The Union Horse Soldiers raided Rosedale as Grant was laying siege to Vicksburg. Captain Dan Fletcher stopped his unit at the Creekside Plantation, where Colonel Earl Van Dorn, Sr. was standing with his daughters.
Captain Fletcher greeted the one-armed retired Confederate Colonel, saluting smartly. They exchanged pleasantries, then Captain Fletcher got to business. The Captain wanted to know where the Confederate gold was buried. The Colonel said he had no knowledge of buried gold. They parried politely for a few minutes, the daughters in their long skirts glancing occasionally at the restless union raiders.
Finally, the Captain delivered his ultimatum: lead them to the gold, or the Captain would hang one daughter at a time. A soldier held up a wicked looking coiled rope. The daughters gasped and put a hand to their necks.
The Colonel shifted and waved his stubble left arm, which caught the Captain's eye. Then in a flash, the Colonel slid a straight razor from his belt, flipped the blade open, and slit his own throat. Blood gushed everywhere, spraying the Captain; the Colonel crumpled, dead before he hit the ground. The horses pranced nervously, their nostrils flaring, while the Captain circled the dead Colonel and his bereaving daughters.
"Burn the plantation mansion," the Captain ordered.
The oldest, quick-witted daughter who had been watching from the shadows of the mansion entrance, grabbed two throw pillows, stuffed them under her skirt, fluffed her blond hair into disarray and sprang onto the colonnaded porch.
" I am pregnant with twins. " She hollered. " Burn my house and you will burn me and my babies".
The Captain eyed her, thinking of his own wife with child. He took off his hat and swept it across his chest.
" Boys, we have caused enough grief for one day." The Captain said.
The seemingly pregnant daughter held out her hands. "Enough grief for this war." She cried. Her beloved father, the Colonel lay dead on the ground.
But the Confederate gold was safe.
Today the plantation is on the annual Rosedale Historic Homes Tour, which ends at Creekside with mint juleps and canapes.
Posted by Tom Reese at 6:26 AM