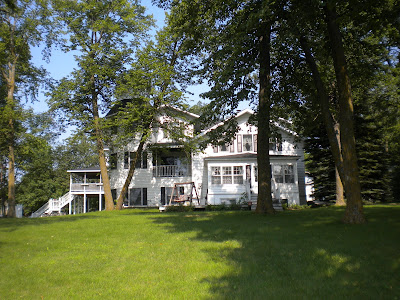 Louisa Ann knew they planned to kill her. Their plan was to let her waste away, locked in the bedroom of the family lake house. No one would come looking for Louisa Ann on remote 7th Crow Lake. Her husband and son were dead, killed in an unexplained boat explosion while out on the lake. Perhaps Amy, her daughter-in-law with help from her "cousin" George, had killed them.
George and Amy were after her money. If Louisa Ann died, Amy would inherit all of the Anderson family money. Such a travesty! Was there no higher spirit?
Louisa Ann had recently had haunting dreams of Ojibwe Indian lore, a legend about a strange creature who roamed the forests and lakes of Northwest Minnesota. At nights, even though Amy and George drugged her, Louisa Ann heard unfamiliar sounds; she saw shadows in her room.
Downstairs Amy and George sat and discussed killing Louisa Ann outright. George would happily smother her. But Amy insisted it must look natural. The locals knew Louisa Ann was not well. Amy was convinced it was a matter of days.
The two started when a slow banging of a drum began: boom, boom, boom. George sprang up. It was coming from the basement. They went to the basement door and George took out his snub-nose revolver, cocking it. He opened the door; the drumbeat was louder.
Amy switched on the basement light and they went single file down the steep stairs. They took a few steps when something grabbed their left ankles, lifted them, and threw them head first down the stairs.
Louisa Ann was dozing when she awoke to the strange drum banging, then she heard the single gunshot. She sat up and listened. All was quiet for a few minutes, and then her bedroom door creaked open. Was George going to shoot her, a suicide?
But Amy and George were not there, no one entered, just a strange scent floated into the room, a white aromatic cloud, with a touch of lemon and cinnamon. Louisa Ann tried to fan the cloud away, but when she breathed it in, her head cleared immediately and she felt a tingle run through her body. Her bedridden aches and pains vanished. Louisa Ann got up and cautiously went downstairs; she ran to the phone and dialed 911.
Later after the hubbub had died down, Louisa Ann sat on the couch with her first glass of wine in weeks. She looked ten years younger. The State Investigator posited that something caused Amy and George to go to the cellar, perhaps a noise. George had taken his revolver with him. It appeared the cellar light went out and the two tangled, tripped and fell head first, while triggering the gun. Death was instant.
Louisa Ann smiled at the Inspector. There was someone after all. And Bless the Ojibwe Indians, who had let the creature be.
Today the Anderson Homestead on 7th Crow Lake is empty. But every night the caretaker puts a plate out, and leaves a light on.
Posted by Tom Reese at 2:31 PM