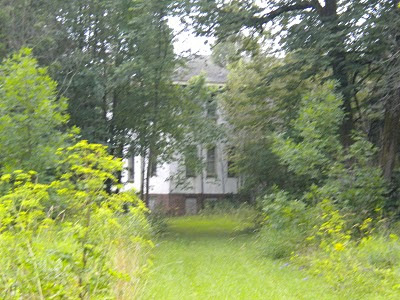 The Inspector decided at the last minute to visit the Lake Julia Experimental Station, a mistake. On first glance the station, an euphemism for a facility testing alternative treatments for the criminally insane, was impressive. Dr. Frankel, the Station Director, was charming and informed; the staff were conscientious and efficient.
The Inspector was allowed to interview Giuseppe Maretti, nicknamed Dago Joe, a notorious serial killer. Maretti killed more than 30 women in the Midwest, cutting out and eating their hearts, while keeping a finger as a curio.
The Inspector sat in the small, padded room across from Maretti, who was composed and compliant, confirming he had reformed his evil ways. At one point, Maretti put his finger to his lips and motioned for the Inspector to check the door, which was ajar. The Inspector looked, saying they were alone.
Maretti leaned forward, "I am the real Dr. Frankel." He whispered. "The inmates have taken over the Asylum."
The Inspector was taken back. Quite original; he had never heard that one before. Dr. Frankel hurriedly told the Inspector how he and the staff had been lulled as Maretti and the others appeared to respond to the focused meditation that Dr. Frankel was testing. When his guard was down, the inmates had struck. Rather than escape, they had taken over the station, keeping most of the former staff heavily drugged. Dr. Frankel was kept lucid for medical emergencies, but locked in the padded room.
The Inspector listened intently, then shook his head slowly. Such a story, he thought. No progress with Maretti, just the workings of a devious mind. He rose from the table to leave, when the door was slammed shut and the bolt thudded home. The Inspector stood in conufsion, then looked back at the man at the table.  "I told you so." Dr. Frankel said.
A week later, the Inspector's car was found crashed into a tree on the winding Route 15. His skull was battered almost beyond recognition; death was instantaneous.
Six months later a state audit team made an unannounced visit to the station and the charade was uncovered. State authorities quietly closed the station and retired Dr. Frankel. They relocated Maretti and the other culprits to the high-security facility down state.
Today the Experimental Station is locked and boarded. The grounds are wildly overgrown; "No Trespassing" signs are prominent. The station is off limits to all.
Posted by Tom Reese at 6:43 AM