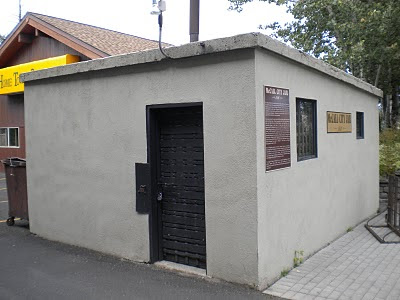 The Assassin was waiting behind the Charmin tissue as Elina Quicksilver paused to study the paper towel discounts. The Shadow Man stepped out and flashed a wicked straight razor, slitting Elina's throat from ear to ear.
Averil Quicksilver, following her mother with the shopping cart, reacted quickly and shoved the cart at the tall man dressed in black. The cart struck Shadow Man in the stomach and propelled him into the meat display. Then she turned and ran toward the front of the store; the Assassin spun and went through the back doors of Paulie's Supermarket.
Averil careened into Bud Pearls, the overweight security guard, who lost his balance and flopped down on the slender Averil, pinning her to the floor. Bud looked down into Averil's bright, green eyes and gasped as he felt Averil tense her arms, lift his bulbous body, and send him flying into the Van Camps baked beans. A feat of great strength.
She jumped up, but was immediately corralled by management and customers who surrounded her. Averil concluded it was better to go quietly then draw more attention to herself and her dead mother.
As it was an early summer 3-day weekend and the Sheriff and Idaho State Police were busy with highway safety, the town decided to keep Averil in the small-town jail until Monday. Several bystanders had witnessed her throwing Bud, all 250 pounds of him, into the Van Camps.  And they wondered.
Later that night Homer Brown, the McCall Constable, looked in on Averil with a plate of cookies and a warm glass of milk. A nice gesture, but Homer had mischief on his mind. Averil was curled up with a blanket  in a corner of the small jail cell, her clothes were neatly folded on the bunk. Homer gulped and fingered the keys on his belt as he approached her cell.
"I brought you some snacks." The pudgy Homer said, licking his lips, romance dancing in his head.
Averil nodded, wrapped the blanket around her and approached the cell door. Homer set the milk and cookies on the pass-through ledge and looked at Averil. She was ravishing: fine white skin, raven black hair, and electric green eyes. Homer's blood raced and his heart pounded as he reached for his door keys. Averil struck her slender hand through the cell bars. She cocked her head and looked at Homer, "Hold my hand, please."
Homer gladly took her hand. "Cup my hand and shut your eyes. See my story, for me?"
He cupped Averil's hand in both of his big paws and shut his eyes.
"That's my mother you see; she was Native American, a Sinaguan Princess from Dead Horse, Arizona. And now you are in that place, Roswell, New Mexico. That is where my Mom had an encounter with my father, who was otherworldly, do you see?"
Homer recoiled at the bizarre vision in his mind and tried to pull his hands away. He wanted to bolt; he was in too deep. But he was stuck there, melded to Averil's slender hand.
"By our standards, Dad was not a looker. But he endowed me with wondrous powers."
She blew on Homer's hands and it was if a switch had been thrown.There was a loud buzzing, the jail lit up in a violent flashing of ugly yellow light. Homer's body jerked, jiggled, snapped, and crackled. His hair stood on end and sizzled; his eyes boiled, and smoke poured out of his ears. Averil pulled her hand away and Homer fell over backward, flat on his back.
In the morning, the Sheriff's deputies found Homer burnt to a crisp on the floor of the jail. Averil was curled up asleep in the corner wrapped in her blanket.
Due to the strange circumstances, Averil was transferred to the Boise Institute for Gifted Girls. Averil was available as a foster child as she was only 17. Or so her documents said.
The Payette jail is no longer used. Today the building sits near the McCall town center in an alley off 3rd Street, a curiosity for the tourists.
Posted by Tom Reese at 9:29 AM