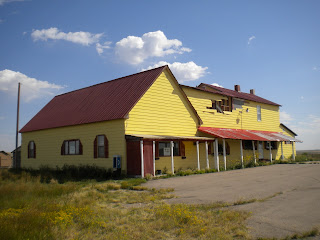 Cannon Raspberry had no sooner entered Karl's Discount then he found himself in the middle of a robbery. There were three of them, wearing gory Halloween masks, shouting and waving their shotguns. People were dropping to the floor, putting their hands behind their heads.
The gunman directly in front of Cannon was pumping his gun and starting to spin. Instead of dropping to the floor like all the others, Cannon inexplicably turned his hands out in a biblical fashion and made a half circle with his right hand.
With that half-circle hand gesture, Cannon's world changed forever. Karl's Discount darkened, as if someone had turned down the lights. Everyone in the store was frozen, or moving in very slow motion. The gunman in front of Cannon was struggling to turn and point his shotgun at Cannon's chest.
What had been the shrill commands of the gunmen, ordering the customers on the floor and the cashiers to empty the registers, was now a muddle of belabored voices, totally unintelligible, as if speaking in foreign tongues.
Cannon grabbed a display bottle of Ste. Chapelle Claret and smashed it over the nearest's gunman's head. The shotgun flew out of the robber's hands and Cannon immediately seized the shotgun and pointed it at the other two thieves. They had seen what happened and were muttering, their eyes flashing, but they also had the same difficulty in turning on Cannon. It was if the two were in a thick quagmire, unable to move swiftly, or speak coherently.
Without hesitation, Cannon aimed at the closest gunman and shot him in the legs, then he shot the third gunman, again in the legs. He watched in fascination, as the two gunmen fell in slow motion, as if something were slowly lowering them to the floor.
The scene was beyond belief, the customers on the floor were writhing, some crying, it all sounded like the Tower of Babel, incoherent mutterings. Cannon's mind was spinning, he wanted no part of this. Everyone seemed paralyzed except him.
Cannon took his handkerchief and wiped the shotgun he had used, then he dropped it next to the unconscious gunman. He raced out of the store. The minute he cleared the store, all sounds returned to normal: calls for help, screams, utter chaos. He looked back and saw customers jumping to their feet. Security men pounced on the downed gunmen.
He did not hesitate, but ran counter clockwise around the big box, running away from his car. He circled to the back of Karl's and took off his blue cotton shirt, his ball cap, sunglasses and dumped them in a dumpster.
Cannon walked quickly and pulled his charcoal t-shirt out of his pants. As he completed the circle, he heard the sirens and watched as two police cars screeched to a stop in front of Karl's. Fortunately, there was now a crowd of people in front of the store gawking, others were racing away away from the store.
He quickly mixed with the crowd and slowly made his way to his parked SUV. Cannon got in, started the engine and headed away from the crime scene. He drove evenly at the speed limit to Ketchum and his room at the Sun Valley Inn. He parked in the garage, then went to his room and out on his small balcony with a bottle of wine and a glass. Time to think.
He immediately thought back to last week's eerie events. He had started the week with a side trip to Silver City, a once booming Idaho mining town. After his visit to Silver City, he had taken the back roads over to Jordan Valley, Oregon. He had gotten lost and ended up at a curious, and isolated one-room school house. Much to his surprise, a young, attractive woman had popped out of the old building, introducing herself as Mary Jane Taylor. She had pleasantly given him instructions that would take him back to the I-84 and Boise where he was staying the night.
Unfortunately, Cannon caught sight of the children. He gaped incredulously at the myriad, tiny children, actually no more than 12 to 30 inches tall,. Mary Jane had then paralyzed Cannon by making a half circle with her right hand. She said he could not leave and one girl, Radika, led Cannon into the school room.
Mary Jane explained they were an expedition with a plan. They came from another place far away. As Mary Jane talked, Cannon became aware that Radika was chewing on his hand and licking the dripping blood from his fingers. Thanks to a sudden thunderstorm, he had managed to escape as Mary Jane had herded her tiny charges to the storm cellar.
Cannon still couldn't believe what had happened, but for the fresh scars on his left hand. He sipped his wine and stared at the Sawtooth Mountains. When Radika chewed his fingers and licked his dripping blood what if she, either on purpose or unintenionally, had passed Cannon an alien virus, perhaps her DNA through her saliva?
He thought about the robbery at Karl's, pondered and what had happened inside the discount store when he splayed out his palms and motioned with his right hand; the place became a swamp for everyone inside. His hand motion was was akin to Mary Jane's when she had paralyzed him. Had Radika given him the power?
If so, what next?
Posted by Tom Reese at 9:54 AM