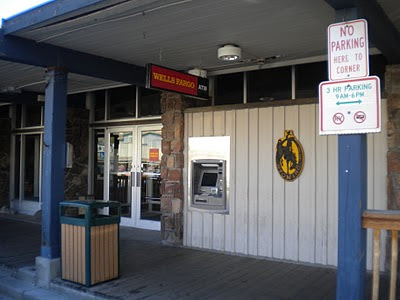 Cannon Raspberry was infected with a virulent virus, passed to him by the alien girl, Radika. Bad news. But with the virus came a strange, as yet mystifying power, which he was curious to know more about.
Cannon planned a small personal experiment of his new power at an ATM on lonely 4th Street in Ketchum, Idaho. It was Saturday night and the Boise State Broncos were playing. Of course, 99% of the locals were glued to their TVs to watch the game. The tourists were few as it was between the summer and the winter seasons.
Cannon sat on a bench a few feet from a Wells Fargo ATM. A gaggle of four boisterous young men went to the ATM and withdrew some cash. This was not the group to hit. Finally, an older, refined gentleman came to the ATM. He looked to be in his mid-sixties, slender and nicely dressed in cowboy boots, jeans, and a tan, suede jacket with outside pockets and fancy leather elbow patches.
Cannon watched as the modern day cowboy inserted his bank card and tapped the keys, leaning forward to gaze at the small display. After a few taps, he nodded his head and the ATM began to whir, spitting the twenty's into the dispenser. Once the customer started to lean forward to take his stash of twenty dollar bills, Cannon rose and splayed both his hands toward the stranger at the ATM. With his right hand Cannon made a half circle motion and the ATM scene froze. The man at the ATM was caught leaning forward, his hand almost to the dispenser to take his money.
Cannon looked quickly around, but 4th Street was empty. He rose and went swiftly to the ATM and grabbed the stack of twenty dollar bills; there were fifteen, three hundred dollars. Cannon felt a sudden twinge to pocket the money and saunter off. But he shrugged it away and slipped the money in the customer's right outside pocket, then Cannon hurried back to this bench, where he again displayed his palms, this time making a half circle motion with his left hand.
Instantly, the scene at the ATM was back to normal and the old gentleman was standing in front of the ATM, but his money was gone! The customer started mumbling and shaking his head; he bent forward and banged on the ATM, then noticed the receipt and his card in their respective slots. He looked at the receipt and said: "What the hell?" Then he took his credit card and put it in his outside jacket pocket.
At that moment the man found his cash. Cannon was watching out of the corner of his eye. The old guy was totally nonplussed and looked over at Cannon. " Hey," he called in an agitated voice, "did you see something here?"
Cannon walked over and smiled reassuringly, shaking his head. " Just you here at the ATM. Why, is there a problem?"
The older man narrowed his eyes and looked up and down the street, but 4th Street was empty. His look softened and he asked Cannon in a sheepish voice: "How long have I been standing here?"
"Not long, a few minutes." Cannon responded.
The gentleman patted his jacket pocket. "That's a relief." Then he turned and walked quickly toward Main Street.
Cannon watched him turn the corner and disappear from view. He smiled, that went well. And no serious damage done, he hoped.
"That was odd, wasn't it?"
Cannon started and turned to see a perky looking blond, cocking her head and smiling at him.
"I was across the street, just got off  work from the rental agency. That old guy...something happened while he was the the ATM. I saw it."
Cannon's heart fluttered. "I was right here on the bench. I didn't see anything. What did you see?"
She  wiped her hair from forehead, then swept her hair back, tucking a strand behind her ear. "I'm not sure. I came out and saw you sitting on the bench and the guy at the ATM, then I seemed to pause for a few seconds. Next thing I know that guy is muttering and banging on the the ATM. Then you went over and he seemed okay and took off.  By the way, I am Nicky Durrance."
Cannon smiled at the girl, but his mind was whirling. "I'm Cannon Raspberry, just here for a few days. And I think the old gent is just fine."
Nicky returned Cannon's smile. Something strange had happened when she came out of the office, she seemed suspended for a few seconds. But the reason she had crossed the street was Cannon. He was at least 6'4", lean, athletic and dressed in jeans with a grape colored shirt. His features were fine and he had wavy blond hair. It was his eyes that intrigued Nicky. She had imagined blue, but Cannon's eyes were dark, an odd dark brown.
Cannon felt Nicky's attraction to him and suggested they have a coffee. Nicky eagerly accepted and they headed off to a nearby coffee shop. He needed to know what, if anything, Nicky has seen of his little experiment.
What did Nicky know?