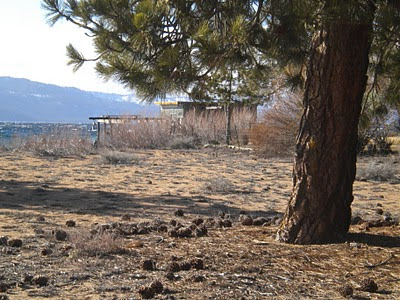 Cannon knelt on the frigid beach behind the tall pine and spied on his ex wife.There she sat in his converted boathouse, comfy beside the gas fireplace, luxuriating in his domain. How he hated her.
He retreated back into the pine forest that bordered the beach and shivered as the wind whistled across Lake Tahoe, the white-capped waves like ghosts on the dark water.
Suddenly, Cannon was struck on the back of the head, a sharp stinging blow that pitched him forward onto his face. Lights out.
When Cannon awoke he was face down in the crisp snow, a pounding in his ears, head aching; he sat up slowly and felt the back of his head, his hand coming away bloody. Cannon grabbed his flashlight and quickly looked around him, but he was alone. Where was his assailant?
Moving gingerly, Cannon sat with his back to the tree and gazed over at his wife's boat house. The cabin was dark; either she had left or gone to bed. He struggled to stand, but paused when he saw a large pine cone  by his feet, as big as a melon with the tip glistening. He crawled over and picked it up, seeing the blood on the pointed end of the cone.
And that is when Cannon forged his diabolical plan.


The Sheriff watched as the Medical Examiner pulled the sheet over the the dead woman. The ME looked at the Sheriff and shrugged. "I have some ideas, the coloring, the eyes. But let me get her back to the Center, then I will know better. There are no external signs of trauma."
They were interrupted as the Deputy entered the boat-house cabin, carrying a large pine cone in his hand.
"You collecting?" The Sheriff asked sarcastically.
The Deputy held it up."Guess where I found this? It was lodged in the gas fireplace exhaust pipe. They are all over the roof. Must have been the wind."
"In the stack? What about the stack hat?"
"It's there by the stack, screws loose, undone in that wind and it fell off." The Deputy replied.
The ME stepped forward and took the pine cone. "This would do it. Clog the stack and the exhaust would be blown through the grill into the cabin." The ME explained, pointing to the large fireplace grill.
"Carbon monoxide?" The Sheriff queried. The pine cone killed her?"
"The coloring, her eyes, now this pine cone blocking the exhaust. That is my suspicion."
"How about that." The Deputy exclaimed. "One in a million the cone would fall into the exhaust stack.
"Statistically a tail event," the ME said."A Black Swan."