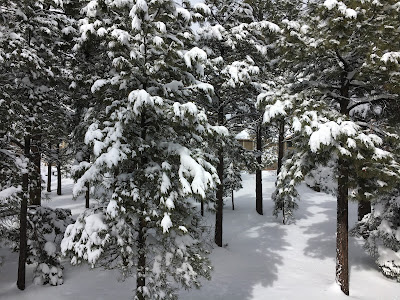 Grayson put a log on the fire in the ranger cabin, then opened a bottle of Arizona Zinfandel wine. He would treat the California agent to one of Arizona's better varietals. His only worry was the unexpected March cold as a polar vortex had dipped down from Canada and subjected Northern Arizona to below zero temperatures.  More snow was forecast.
The visitor was traveling from Nevada and had agreed to meet Grayson, who represented Arizona. It was late afternoon and Grayson was worried as his visitor was late and the temperature was plummeting. Becoming impatient, he shrugged into his parka and decided to head north to see if he could find the man from California.
As Grayson trudged along the winding trail, he thought about the California secession from the Union 10 years ago. The Golden State had created a nirvana of sorts and now Arizona wanted to join California and secede, hopefully accessing the miraculous Silicon Valley formula that appeared to halt aging and ensure unbounded health.
A strong wind whipped down the trail rattling the pine forest and Grayson pulled his hood tight. He recalled telling Tess about his mission and the benefits of joining California. She had heard the rumors, but was skeptical about the California dream. Yes it would be great to have unlimited health and not to age, but there was something cloaked about the program. Supposedly there was no one over 65 in the golden state. What happened to the old timers? What happened to the sick?
His wife had put her hand on his arm. "Be careful." She had advised.
Grayson looked up and saw a figure approaching along the snowy trail. He gave a wave which the figure returned. They stopped about five feet apart and the California man gave the code, announcing he was Harold from Cal Tech. Grayson responded with his name and said he was from ASU. Having established their bona fides the two men shook hands. The Arizona proposal was inside Grayson's parka and he decided to hold it until they were settled in the cabin.
"Coldddd"....Harold stuttered. "..nnnnot built for the cold."
Explaining he had a fire at the ranger station and it was only a hundred yards back on the trail, Grayson turned and started toward the cabin. He heard a clicking and then muttering. Grayson looked back, surprised to see his guest stagger off the trail and into the snow drifts. The struggling man shouted incoherently, then veered to the right bumping the trunk of a tall Ponderosa Pine. The California Rep fell and sank into the deeper snow.
Stunned, Grayson turned to help the man who floundered in the snow with a wisp of smoke emerging from his mouth and making a strange whirring sound. As he bent over to help, the California man's eyes suddenly went blank and he went still, silent. Shocked and sensing something terribly wrong, Grayson returned to the trail confused by Harold's strange collapse. As he stared at the prostrate figure in the snow, a chill ran down his spine.
Slowly the reality of the miracle seeped into his mind and Grayson headed to the cabin where he would have to spend the night as a storm was brewing and darkness was hovering. He recalled Tess's comments that she doubted the California dream, that something wasn't right. " It doesn't pass the smell test." She had said with a laugh.
Back at the cabin, Grayson settled with a glass of wine in front of the fireplace and watched the flames lick at a new log. He threw the Arizona Secession Proposal into the fire, watching as it flamed. Settling with his wine, he recalled Harold sinking into the snow bank with a sizzle, then the clicking and clacking. The Arizona Rep sighed. Tess, as always, was correct.

It was too good to be true.