The Sorcerer and the Spider, Southeast Utah 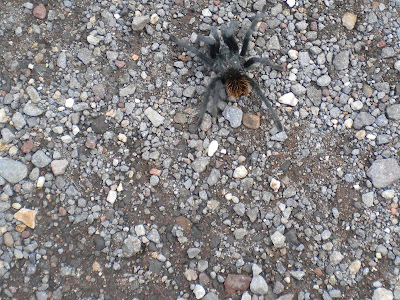 Ritchie held the gun to Hazel's head as they stared at the comatose figure in the bed. The man was covered with a white sheet, his head poking out revealing a long narrow face, eyes closed, a sharp nose, and a widow's peak with jet black hair.
"He looks like a bloodsucker." Ritchie whispered, gazing at the pallid, elusive uncle. Hazel had been skimming drug money to send medicine to her sick relative.  At first Ritchie was going to kill his thieving girlfriend, but then he decided on seeing the beloved uncle in person.
"I am a sorcerer." The old man croaked, suddenly opening his eyes and speaking to the young gunman. Ritchie started and looked at Hazel. "He's a male witch." The girl explained. "Uncle's not a vampire."
The old man's black eyes were fixed on Ritchie who felt a chill run down his spine. It was time to go, but uncle sat up on his elbows and pointed his right arm at Ritchie, extending his forefinger. There was a "whoosh", a flash of light, and then a mist.
Hazel put her hands to her cheeks in surprise as her boyfriend suddenly vanished. When the mist slowly cleared she saw a hairy spider on the window sill and she felt its multiple eyes were staring at her. Before she could speak, a raven appeared at the window, settled and plucked the spider off the sill. The black bird cocked its head at Hazel and then flew away, the squirming spider in its beak.
The girl turned to her uncle in the bed, but she was shocked to see nothing but a pile of gray ashes where he had rested. His last breath and spell had been used to save her, eliminate the torment of Ritchie from her young life.          She went to the side of the bed and knelt as if to pray for her uncle. At that moment the curtains rustled and a breeze stirred the ashes which rose and blew into Hazel's face. Inexplicably, she swallowed the gritty ashes, and then fainted on the bed.

Later, Hazel awoke to find she was kneeling with her hands and head on the mattress. She gingerly gathered herself, noticing that the bed was empty. There was no uncle and the ashes were gone. As she cleared her head, Hazel heard Aunt Maude calling from downstairs. It was time to clean the kitchen.
Hazel rose and was surprised at her well being, the new bounce in her step. She headed down the stairs and found Maude waiting for her. The aunt was tall, bony, with a horse face, small green eyes, and scraggly red hair in an uneven bun. "Well Ms Got Rocks, you need to do the kitchen floor. And this time on your hands and knees with a scrub brush." Maude directed harshly.
Without thinking, Hazel raised her right arm and pointed her forefinger at her nagging aunt. There was a "whoosh", a flash of light, and then mist. When the haze cleared there was a piglet where Maude had stood. It squealed and wagged its curly tail, watching the girl with confused eyes.
Hazel nudged the piglet to the back door with her foot. She then gently booted the animal into the back yard and watched it race off into the woods, the neighbor's dog in eager pursuit. She closed the door and leaned against it, a smile spreading on her pretty face.

Things were looking up for Hazel.