The Cabin in the Woods, Brandon, Vermont 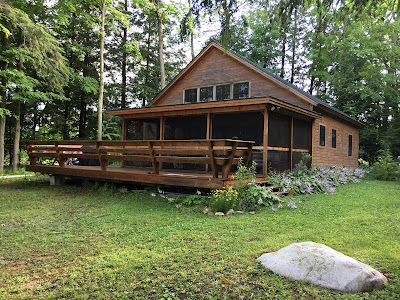 Mackenzie was sipping a glass of wine on the screen porch and reading about the pre-Colombian mound people who settled in Cahokia on the Mississippi, east of St. Louis. Her reading was interrupted when a bolt of light soared over her, flashing across the lake, a piece flaring off and falling on the mountain side. The meteor disappeared over the New York State Adirondack Mountains and headed west.
The young woman left the porch and stood out on the deck, staring into the blackness of the quiet lake, scanning the landscape a quarter mile away which was blanketed with evergreen trees and undeveloped. Had a piece of the meteor fallen into the pines? Was it a meteor?
Mackenzie cocked her head as she realized the crickets and the croaking frogs were silent. The night sounds had ceased, but then she heard a chirp and croaking as they started again. A chill ran through her as she wondered why the music had paused.
Mack shrugged off the meteor and suddenly felt tired. The wine and her meds were taking taking their toll. She went to bed and immediately fell into a deep sleep. Suddenly, she was back on the deck and watching as the meteor passed over her, a piece falling on the mountainside. Then she saw a figure emerge from the evergreens and climb onto rocks known as Old Maid Cove. The person paused and then began to glide across the water. Mack was frozen as the figure silently flew over the water to the rental cabin down from her.
With a start, Mack awoke from her sleep and sat up, looking around her dark bedroom. She cocked her head but breathed easier to hear the frogs and crickets. The man on the rocks had been a dream, a nightmare as she recalled the figure gliding over the water to the cabin at the end of the peninsula. She sighed smiling to herself and fell into an easy, deep sleep.

The next day she was up early and out on the screen porch with coffee, a heavy sweater and sweat pants to ward off the late August morning chill. Mackenzie was just digging into her book when Bobby Walker who lived on Route 30 and took care of the peninsula came around the corner. "Hey," he called. " You have a neighbor. I rented the cabin on the end last night."
Mack sat up and went out on the deck offering Bobby a cup of coffee which he refused, saying he had to mow the grass along side of the road. He went on to explain that the renter was a single man, a computer engineer who was writing code and would be there for two weeks. A friend had brought him  to the lake and would come on occasion to take him to Brandon or Rutland for shopping. Apparently the engineer did not drive. Mack updated Bobby on her husband Josh, who hoped to join her in 10 days.
Her garrulous neighbor also noted a meteor had passed over them last night and fallen somewhere in New York state. Mack commented she and seen it and Bobby said the meteor story was in the morning Rutland Herald. He then excused himself and headed to the nearby barn to get his mower. Before long the silence was broken by the roar of the lawnmower and she retreated to the porch, sighing as the machine headed down the dirt road, the racket diminishing.
Sipping her coffee and picking up her book, she hesitated, thinking about her dream and the man on the rocks. Now there was a renter in the place on the point, an engineer who did not drive. Strange.
Later that morning she walked down to the dock, staring  at Old Maid's Cove as her mind percolated. She thought about the mound builders and how they flourished in the 1100s, Cahokia's population was as large as London in those days. Then in the 1300s they vanished. Conventional wisdom was river floods destroyed many mounds and the mound-builder population dispersed, eventually assimilating with the Native American tribes. But that theory nagged Mackenzie as the mound builders were sedentary, and the Native Americans were nomads, following the seasons and the buffalo.
The Cahokians just up and left, Mack concluded. But maybe there was an alternative theory. Perhaps they, like the pyramid builders, were aliens. That realization brought her back to the stranger, the figure who glided over the lake in her dream. Had the meteor been an UFO which ejected a capsule landing Bobby's new renter? Was an alien on her peninsula? Or was it time for her meds to fend off the recurring paranoia?
That afternoon Mackenzie swam her mile along the shoreline, then had a light meal and was in bed by nine. In a deep sleep, she suddenly awoke in the dark to a presence straddling her. The person leaned down and nuzzled her neck, emitting a dank, fetid odor. Mack started to scream, but was silenced with a sharp pain that radiated in her throat and she sank into a deep coma.

Mackenzie groggily awoke as a hand gently shook her. "Hey," you okay. She sat up slowly pulling the covers around her. It was Bobby standing near her bed, looking concerned, and embarrassed to be in her bedroom. "It's almost eleven and I didn't see you about, so I checked. You okay?"
"Must be the flu." Mackenzie said weakly.
"I'll bring some of Nell's stew over." Bobby said, backing out of her bedroom. "Leave it on the porch for you."
Then he was gone. The dazed young woman lay back on her pillow. She closed her eyes and relived the nightmare. She felt her neck, and the pin pricks throbbed. A deep dread seeped through her as she slowly realized what had happened to her. More importantly, what she had to do.
Sleeping all day with a break to gobble Nell's stew, Mack spent most of the day in bed. But surprisingly she awoke the next day refreshed and invigorated. She immediately developed a plan, rooting in her kitchen until she found a wooden mallet. Next she searched in the woods behind her cabin finding a solid Hemlock branch, which needed work. She spent the afternoon shaping the piece of wood with her husband's hunting knife. Later that evening, she surveyed her implements and plotted next steps, which would begin in the morning just before sunrise.
The next day Mack was up before dawn. It was chilly and she put on a dark cardigan, putting her tools in a small carrying bag. She slipped out of the door, noting there was a hint of dawn to the east behind the Green Mountains. She hurried down to the point cabin and paused at the porch door. Smiling to herself, she  moved a flower pot on the ground to find a door key.
Moving as a shadow, she opened the door and slipped inside, noting all the blinds were closed to shield from the sun. Mackenzie was startled to see the lodger lying on the dining room table, his legs splayed and his arms folded over his chest. He was six feet and trim, but easily 180 pounds. More gripping was his long face with high cheek bones, his skin an eerie alabaster. She moved to his left side, setting her bag on a chair and opening it. Pulling out the hemlock stake she had fashioned and then the wooden mallet, she took a quick breath. There could be no pausing or reconsidering, so she placed the stake over his heart and hit it with a solid whack.
The man on the table shrieked and threw his arms open wide, almost hitting Mack who jerked back. Without a pause she gave the stake another bang, then another and the stake exited his back, hitting the table. The man's mouth flung open and she caught that dreadful, fetid smell. A black cloud escaped his mouth and suddenly enveloped her body as if embracing her. She screamed and jumped, watching as the cloud left her and floated out of the open door. The miasma disappeared over the back pond.
She returned to the table and pulled the still body off the table and rested him in a chair, which Mack then tilted and dragged onto the porch, setting the chair in front of the screen door. Stepping away, she watched as the sun peeped over the mountains and a beam of sunlight struck the stranger whose body began to smoke. Then suddenly his body collapsed into a pile of ashes. Mack moved the chair and swept the ashes outside among the flowers by the steps.
It was early evening as the sun touched the western Adirondacks when Mackenzie awoke and cautiously looked around her bedroom. She had returned from her quest, cooked a breakfast of scrambled eggs and bacon with toast. Shutting the blinds she had laid down for a nap, but apparently she had slept the day away.
Getting out of bed, she marveled at how well she felt. There was no guilt. She had done the necessary. She heated leftover coffee in the microwave, then went out on her deck as the sun slipped behind the mountains to the west. The coming darkness was oddly welcome to her. Mack had not taken her meds since the stranger attacked her, and intuitively she knew the paranoia was now gone forever. She had a new found strength which reassured her.
Yet a thought nagged Mackenzie. Had she been infected?