The Star-Crossed Lovers and the Chipmunks, Lake Hortonia, Sudbury, Vermont 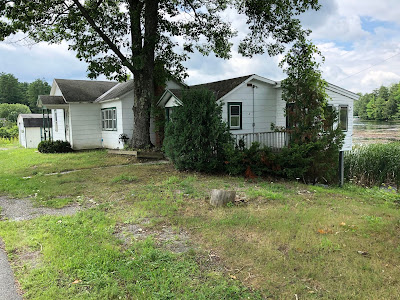 Two days later Jody had set a course. He would return to their Burlington Mansion. The servants had the month off so no one had seen them go. He would start calling Steph's cell which was in her purse with the package.  After another week, he would call their few friends, continue calls to Steph's cell leaving a voice mail asking her to come home. Steph was known to go off by herself. The cottage on the lake was to be their quality time together.
Jody decided it was time to return to Burlington. But he wanted a final goodbye, as he had truly loved his rich, erratic wife. Early in the morning, he drove over to the road to the cliff, his thought was to look down on her resting place as the sun rose over the green mountains.
As he turned on the sloping road to the cliff barrier, Jody tapped the brakes, but the pedal went to the floor. No brakes. Then the SUV suddenly accelerated. Jody glanced down and was shocked to see two chipmunks perched on the tip of accelerator, forcing the pedal down. Had the chipmunks chewed through the brake line? The black and white barrier was looming ahead and in panic Jody reached for the door, thinking to tumble out of the speeding vehicle. But he slammed through the barrier and flew out over the lake as the sun peeked over the Green Mountains. Then gravity took over and the SUV plunged into the dark, cold waters beneath the cliff.
Ironically, the car settled 15 feet away from Steph's sail-wrapped body. When the divers found the car, they would see Steph's white shroud.

It was late fall and the trees were ablaze with colors. Andy pulled the car up to the quaint, white cottage on the cove that looked down the lake. The newlyweds stared at the isolated spot. "Oh my, perfect!" Sandy gushed. "I'll take a peek." And the young bride hopped out of the car, knocked on the door, then cautiously went inside.
In a minute she reemerged. And Andy leaned out of his window. "How is it? Anyone one there?"
"Just what we want." Sandy replied. "Its empty, except for two adorable chipmunks."