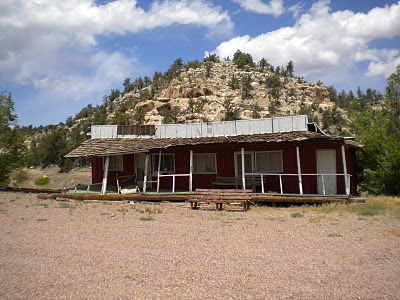 Mary Maude, a young widow formerly known as Evening Star and of Yavapia Apache descent, was known for her tasty pies and delicious snickerdoodle cookies. Mary opened a small shop off Route 260 on the Mogollon Rim, just outside of Heber, Arizona. She prospered, selling her baked goods and antiques from her store.
One rainy afternoon, Johnny Quicksilver came to town and tasted her pie, lingering with an enchanted Mary Maude. She fell in love with Johnny, who happened to be a notorious Colorado bank robber.
A few years later Mary and Johnny died in a furious shootout during a bank robbery in Telluride, Colorado.
Their gifted daughter, Ella Mae Quicksilver, survived and moved on to Roswell, New Mexico.
Posted by Tom Reese at 9:38 AM