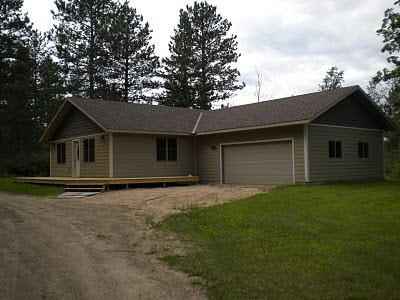 David Matchler performed a whirlwind romance of the very patrician, Claire Wilkinson, who was an heir to the Wilkinson Timber Fortune. David and Claire eloped to Reno, Nevada; an Elvis impersonator married them. No time for the prenuptial agreement.
When they returned to Benedict Lake, David built Claire with his own money and hands a simple house shaped like a giant "L". As you drove up the dirt drive you could see the house was an L, for the Love House.
Early that spring, David and Claire, both avid sailors, went for a sail with Claire's beloved Comet, Eagle on Lake Kabekona, known for its stiff winds and sometimes violent summer squalls. Claire and David were enjoying themselves immensely, when a squall, replete with thunder and lightning, hit them. David mistakenly turned downwind in a gust and the sailboat flipped over. They clung to the keel, as the storm raged and the heavy rain and mists enveloped them. They were invisible from shore.
Claire clung tenaciously, but David could see she was tiring and shivering, mewing as the wind howled. Suddenly David slammed his elbow into Clair's face. She fell back into the water stunned. David quickly undid her life jacket and kicked Claire into the turbulent water. She sank like a stone.
It was another hour before the storm cleared and a fisherman saw the overturned sailboat. David was almost gone when the fishermen pulled in him and covered him with blankets. Once David recovered, he told the tale of them clinging to the keel, of Claire 's sudden disorientation, and Claire undoing her life jacket and trying to swim to shore. David went after her, but she vanished into the mists.
Three days later searchers found Claire's body on the rocks at Thunder Narrows, where Lake Kabekona flows into the bigger Lake Leech. The waves had battered Claire' body on the rocks. It would be a closed casket.
David sank into a melancholy comatose for six months. He would not speak or leave the Love House. David told his lawyer he did not want Claire's millions of inheritance, which was duly his. But David did not sign the inheritance release papers. He was too distraught.
Six months later, David emerged from his fugue and told his lawyer to transfer the money from the inheritance escrow to his account. Then David set up a trust fund for the maintenance of the Love House, never to be sold or rented, just maintained as a memorial to Claire. Today the house sits eerily empty, but immaculate. Rumor has it that David then drove west; some say he is in Fargo, North Dakota; others say he is in the Missouri Breaks.
Justice has not been served. But Claire's account will be balanced. The haunting has begun.
Posted by Tom Reese at 1:56 PM