A Battlefield Error and the Homecoming, Spanish Fort, Alabama 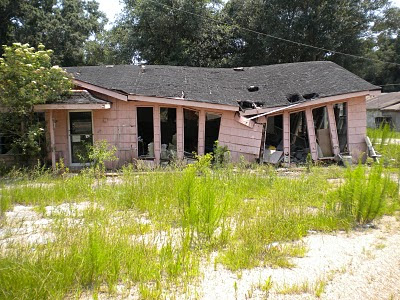 A week after Jeanette endured the somber military ceremony, and after her family and friends had left,  Cannon Raspberry came out of nowhere. The attraction was instant and within a week Cannon was in the back guest room and helping with Jeanette's PinkCharm, her knickknack and candy store. Jeanette had never been happier. After 6 months, she was sure she had found her beloved soul mate in Cannon.
And then one night the call came. Ralph's vehicle had been blown up, but Ralph had survived and wandered off into the Afghan Mountains. The casket was a case of mistaken identity. The Army offered sincere apologies.
Instantly, Jeanette told Cannon, who took the news stoically. In the morning Cannon Raspberry was gone, leaving a note: " On the back roads, off the grid,  but you are always on my mind."
A month later Ralph arrived home at the PinkCharm doorstep, his soldier friend beside him. Jeanette was delirious hugging and kissing Ralph.
" Of course your friend is welcome." She said.
" This is Jeremy, my partner. " Ralph replied.
Three days later, Jeanette secured the PinkCharm for the hurricane season and began to search the back roads for Cannon Raspberry.
Jeanette's search goes on.
Posted by Tom Reese at 3:18 PM