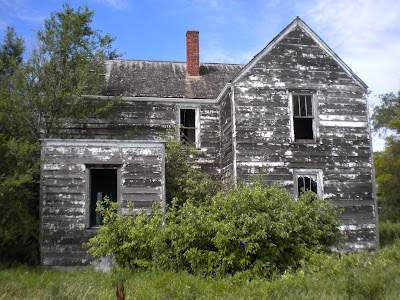 Alex Bentley answered the door, there were soft words, then a gunshot and Alex fell dead on the cabin floor. Linda sprang into the cabin followed by Ken and Phil, each waving a handgun.
Sarah stood mute with horror and fear as she looked from her dead husband to the intruders, who quickly scanned the cabin. Ken raced up the stairs to check the master bedroom and bath. He returned and gave a thumb's up.
Phil smirked, looking Sarah up and down. "I got dibs."
Sarah recalled a jail break down south, two men with help from a girlfriend: armed and dangerous. This trio fit the description.
"I have to go to the toilet." Sarah said, nodding upstairs.
The three laughed, then Ken ordered Linda to take Sarah to the bathroom, while they scouted for money and valuables.
Sarah led the way to the small bathroom. She sat while Linda studied herself in the bathroom mirror. Sarah's eyes were drawn to the small window over the bath tub. There was a blue light hovering outside, which suddenly focused and shot through the window, bathing Sarah in a gauzy blue hew.
Linda was putting on lipstick when she glanced over and saw Sarah illuminated in the blue light. She dropped her lipstick and turned to Sarah, but the light was gone and Sarah was now looking intently at Linda.
"Keep quiet and I will let you live." Sarah said softly, rising to adjust her jeans, then opened the door and went downstairs. Linda followed behind.
As the girls came down the narrow stairs, Ken looked up and noticed Linda was pale and her eyes were darting toward Sarah who was unnaturally composed. Linda joined Ken and Phil, and told them she had seem a blue light envelop Sarah.
"Too much crack." Phil snorted.
But the three intruders sensed a change.The balance of power had inexplicably shifted.
"You can take firsts." Phil murmured to Ken.
Sarah was standing by the fireplace next to the fire irons. Ken snarled, "there are three of us. Let's do this bitch".
Sarah grabbed the poker and hurled it at Ken, sent it sailing through his mouth, smashing his yellow teeth and impaling Ken on the wall. Neither Phil nor Linda saw Sarah's move. So fast.
Phil 's hand went to the back of his jeans for his gun, while Linda lifted her snub-nose revolver. Sarah grabbed the fireplace shovel and swatted the gun out of Linda's hand, then pushed the shovel, which flew at Phil, catching him in the throat. Phil's head flopped on his shoulder, his mouth wide.
Sarah whirled on Linda and put her hands on the sides of Linda's head. Sarah backed her against the wall, her face so close that Linda thought Sarah was going to kiss her. Sarah smiled, "I told you to keep quiet." Then Sarah twisted Linda's head until there was a snap, like a chicken bone cracking. Linda fell in a heap.
Sarah spent the night holding Alex's hand, talking softly. In the morning, she was gone. The police eventually came, but no one could explain how it went down. Alex was shot, Ken impaled with the fire poker, Phil almost decapitated,  and Linda a broken neck.
Sarah Bentley is listed as missing, a person of interest.
Today the bank owns the remote house outside Coeur d' Alene and it sits empty.
Posted by Tom Reese at 8:32 AM