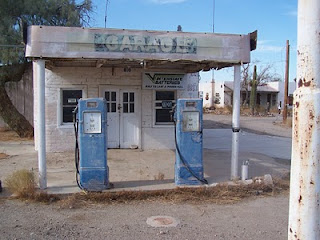 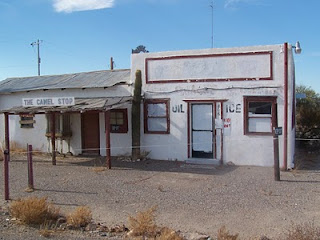 Harvey was part of the advanced 1st Marine Unit landing on Wake Island. He was wounded and airlifted to Oahu Army Hospital in serious but stable condition. Harvey was assigned a young nurse from Minnesota, known as Dixie.
Dixie took an immediate liking to Harvey and sat with him as much as she was allowed. He recovered and was sent back to the Pacific theatre. They agreed to meet on Dec 24th, 1947 in Chinatown, San Francisco when the war was over.
They met and knew it was a romance that had survived the War. Harvey's dream was to own his own gas station, so he applied for a GI loan to start his business. Harvey and Dixie headed out of California to find the perfect location, discovering a vacant site just east of the Colorado River at Quartzsite Arizona. He built the station and adjacent store with hope. As cross-country travel was booming, he and Dixie prospered.
They soon had a liter of three who were helping out at the station and the small store next door. On one of those thunderous stormy desert nights a heavy front hit them with full force. Near midnight, a hard knock was heard at their front door and Harvey went to see who could be out in the storm. There was a tall stranger at the door, thoroughly soaked. He had run out of gas about five miles back and asked for help with a can of gas and a ride back to his auto.
Harvey loaned him a coat and together they went out to the station, filled a can, loaded it into the 54 Hudson and Dixie heard the loud V-8 pull away. Harvey did not return that night and in the morning, the State Police found her husband lying in a culvert about 15 miles from home, Harvey's skull was crushed; he was shoeless and missing his watch and wallet. The local sheriff  and deputies worked on the case for over two years, but there was no trace of the Hudson or the stranger.
Dixie and the kids could not run the businesses alone and finally they gave up and moved back to Minnesota to live with her mother. The gas station never reopened; no one stepped forward to revive the gas station and store. During an Army maneuver in 1964, a squad of army techs from Fort Huachuca used the store to test communication equipment. Oddly, the equipment malfunctioned and the soldiers left the store as they found it.
Today the little gas station and store sit empty, a reminder of another time.