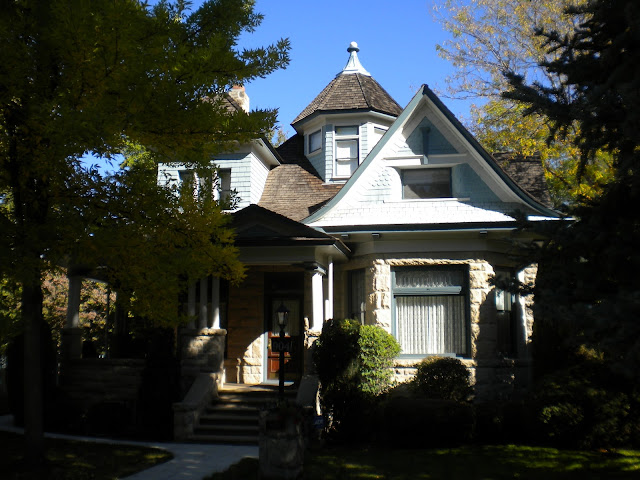 I was standing in my kitchen, unpacking boxes when I heard someone call my name, “Charlotte.” It was faint but I heard it plainly and I whirled around trying to determine the direction of the voice. It was a child’s voice, a young girl, I was sure of it but…whose child could it be and how did she know my name?
I’d only moved into the house a month ago and lucky to find it. It was perfect for me though bigger than I’d been looking for. Three stories, with the third a large attic that was sealed off by a locked door. The realtor didn’t have a key and was vague about the attic, surprising but I guess not unheard of. I hadn’t found an attic key in my search through the house, though I wasn’t too surprised by that either. It was an old house and had been unoccupied for a number of years, since its elderly owner had entered a nursing home. Vague talk of a psychotic breakdown.
The house was in lovely shape in spite of its neglected years and I took to its large open rooms and many windows that looked out on an expansive, once-cared for gardens, now all gone to weeds and decay. Someday they would look different, but for now I was focused on getting settled and unpacked. My dogs were outside, it was quiet in the kitchen and I was unpacking a large box of mismatched Tupperware, intent on throwing most of it away, when I heard someone call again.
“Come find me, Charlotte”
There was no mistaking it. The voice was definitely a young girl’s voice and she was most certainly calling me, which was strange and weird because I’d yet to meet my neighbors. Actually, there were no nearby neighbors and I knew absolutely no one in Boise, so the chances of anyone knowing my name were slim.
I reluctantly abandoned the box filled with colorful plastic bowls and hesitantly walked to the kitchen’s doorway. Though I didn’t know exactly where the voice had come from, I did know it was coming from inside the house. Until that moment, the voice’s presence inside the house hadn’t registered with me. That realization sent a shiver down my spine, and I slowed my steps even further. Who was there?
That night I was awakened by a presence in my bedroom. I sat up with the covers drawn to my chin. In the light of the moon, I could see a young girl at the side of my bed, wearing a simple white dress, her hair parted in the middle and touching her slight shoulders.
She put her finger to her lips. I was not afraid of the slender girl in her early teens, but my heart was pounding. “Who are you”? I asked. “What are you doing here?”
“My name is Alice and I want you to help me. I cannot go home. Please, help me.”
I sat up and Alice told me she used to live in this house. Five years ago a man had come to fix the leak in the cellar. Alice’s mother, a nurse, had been called back to the hospital. Alice took the plumber to the cellar. “He hurt me.” Alice said. “I don’t want to talk about it, but he killed me. I am buried in the garden, but I need to find peace and go home.”
My first reaction was this was a weird prank. But no one came forward and Alice leaned toward me. “What can I do?” I asked. ‘You want me to go to the police?”
Alice shook her head, telling me it was too late for the police. Redemption was the answer, and then she could move on. Alice asked me to bring her assailant back to the house and she would forgive him. Revenge would not help her.
For the next week, Alice often visited me after midnight. Sometimes she just sat there until I fell asleep. Other times we talked, but she would never detail what her assailant had done to her. And I did not want to know.
Finally, I relented. I agreed to Alice’s request that I go to Buster’s Sports Bar on a Thursday night and meet Andy Borden, her tormentor. The first night I went after the Thursday evening football game started and I saw him, an older man with thinning hair, fit looking, perhaps a former athlete. I made a point of going to the bar on Thursday nights and eventually we began to chat. He told me he was a hydraulic engineer and semi-retired. I explained to Andy about my problem faucet in the basement and he offered to take a look.
Andy followed me to the house and we went in, hesitating in the hall, as Andy looked about. He rubbed his hand over his face. “I have a sense of deju vu.” Andy said. “I have been here before, but I cannot place it.”
My blood went cold and I clutched my bag, which had small revolver in it. Andy explained he’d had a stroke three years ago. His movement was okay, but the memory of his time before the stroke was scant.
We stood at the head of the cellar stairs and Andy looked at me. “Yes, I was here. There was a young girl. She took my hand and led me into the basement. I…”
Before Andy could finish his story, there was the shriek of a banshee, a flash of a wraith and Andy was pushed violently in his back, throwing him headfirst down the steps. He landed at the bottom, his head turned grotesquely. Andy was dead.
What happened to redemption?

Three weeks have passed since Alice’s last visit. Three weeks since Andy Borden had “tripped” and fallen to his death down the basement steps. There was no link between me and Andy. I had no obvious motive to do Andy any harm, so Andy’s death was recorded as an unfortunate household accident. During the investigation I had gotten to know the young detective on the case. As a courtesy to me, he had looked back to find the missing girl case at my house. Oddly, there was no report of a missing girl, no Amber Report, nothing untoward at my address on Old Idaho Penitentiary Road. The detective did tell me the neighbors avoided the house. A wag talked of a demon, which the detective assured me was nonsense.
But I wondered. Had I been manipulated?
Tonight I awakened to find Alice once again at my bedside. Her eyes were hard and glittered red in the dim light.
“There is someone else.” Alice said.

Contributor, Cindy Baker
Posted by Tom Reese at 8:52 AM