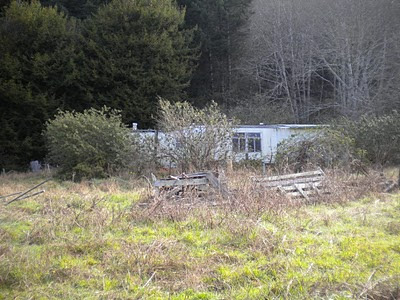 ﻿
Margie never picked up hitchhikers, but she could not resist the handsome young man looking lost alongside Route 101, just after she passed the Oregon Rain Forest’s Prehistoric Gardens. Besides, Margie had a plan.
The young man readily accepted her ride and hopped in the passenger seat. He was tallish, lean with broad shoulders, light brown hair and a beautifully bronze skin. His eyes were a wolfish gray that sent a chill down Margie’s spine.
She smiled nervously at him, then extended her hand. “I’m Margie Souter.” She offered.
The young man sat silently and then shook her hand, but said nothing.
“What’s your name?” Margie asked.
“R-77.” He said, giving her a slight smile.
“What does the R stand for?” She asked.
“Research,” he replied. “
Margie was taken aback. Was he putting her on? For an instant she considered stopping and letting him out. But something about him, his presence, and his strange scent with its haunting timber-like smell attracted her. She did not want to let him go, not yet anyway.
“I’ll call you Rick, a nice manly name. You okay with that?” Margie asked.
“Yes, Rick. I like it.” He replied with his engaging smile.
They drove on in silence and Margie thought about her losses at the Chinook Casino, where she had once again hit a bad streak. Now she was down at the heel and hungry.
“Can we stop and eat?” Rick asked, as if reading Margie’s mind.
Margie explained she did not have any cash. Rick shrugged and directed her to stop at a convenience store. She pulled in and Rick got out, stopping to talk to the young girl at the cash register. The girl smiled, sniffed the air, then went rigid for a few seconds. The cashier recovered and opened the register, took out a wad of bills and handed them to Rick.
Rick went through the store collecting items and returned to the girl and paid her with some of the money she had handed him. Margie watched this transaction and rather than be horrified, she was thrilled. Rick had mesmerized the cashier; he had the charm. Margie’s brain was abuzz with possibilities.
As Margie waited for Rick, it struck her that once again the Route 101 Prehistoric Gardens had been closed; it had been shuttered almost a year now. She had heard rumors that an agency of the Government had been using the rain forest venue for experiments. Testing what?
Rick emerged with his shopping bag and they left the convenience store. Margie drove to her double wide trailer, which was set on a flat area of a hill overlooking the Pacific Ocean. Her accommodations were economical, but in a million-dollar setting. She parked and they got out and looked to the ocean, dark waters, white capped waves, jutting rocks along the beach, the rugged Oregon Coast.
At that moment, Denny C. stepped out of the shadows. “Who is this creep?” He asked, slurring his words, a beer too many; he reached to his belt for the snub nose he always carried. Rick turned as Jimmy advanced in a threatening manner. But Rick stood his ground and suddenly Denny slowed and went rigid, then shook off the feeling and smiled. “You guys okay? Got dinner there, can I help out?” Denny asked.
Margie was stunned by Denny’s changed demeanor; this was not going to Magrie’s plan. She did not put it past Denny, her ex boyfriend and insanely jealous, to pull his gun on Rick. Instead, Denny was offering to help with dinner.
The trio went into the trailer, cooked hot dogs and beans and drank beer. Eventually, Denny excused himself, shook Rick’s hand, and kissed Margie, and then departed down the hill. Margie was adding it up. Rick had an extraordinary effect on people, everyone seemed to like him. Rick’s personality disarmed them, set them at ease. What exactly had Margie discovered?
That night they were in bed together, side by side. There was a full moon and Margie schemed. Her initial plan had been to bring Rick home. Denny C would be there with his snub nose, shoot Rick. Margie would console Denny, then the police would arrive. And Denny would be out of Margie’s life forever. But Rick’s irresistible charm had changed that. Time for plan B; Margie needed to draw Rick into her orbit. He would be golden with the timber widows at the casino, first the slots, then cards, maybe some of her pseudo art. The sky was the limit. But Rick had not made an advance, so Margie would have to encourage him, entangle Rick in her web.
Margie turned on her side and sat up, bending over to kiss Rick; his eyes flew open and for a second Margie peered into Rick’s soul, seeing wheels and gears meshing, looking into clockworks. Margie gasped.
Rick put his left hand on Margie’s throat, moving on top of her, and then slowly twisting her head with his right hand. Margie squirmed, but Rick held fast. Held her to the last.

Margie’s front trailer yard was full of vehicles: the Sheriff, the Oregon State Patrol, an EMS truck, and off to itself, a sinister, black DARPA SUV where two men in suits huddled.
The tall, thin man lit a cigarette and looked at his partner. “So, Doc, what do you think? Your boy?”
“Someone with strength, not your everyday Oregon transient. Yes, our boy.” The Doctor responded dryly.
The tall man nodded. “But why did she pick him up? And why bring him home to her trailer?”
The Doctor smiled. “The charm gene, the modification."
The tall man asked. "What 's the big picture with this charm guy?"
"Let's say we have a despot who wants to build the bomb. We put our man the U.S. Embassy, he charms his way up the ladder, all the way to the top. Tells the despot that African Orphans are a better use of resources. 'Splendid idea,' the despot agrees. One less bomb in the world."
The tall man puffed on his cigarette and smiled. "Sounds good, but it seems our guy has a fatal charm."
The Doctor grimaced and looked out to sea. " And where is he? Where has R-77 gone and what will he do next?"
Posted by Tom Reese at 7:53 AM