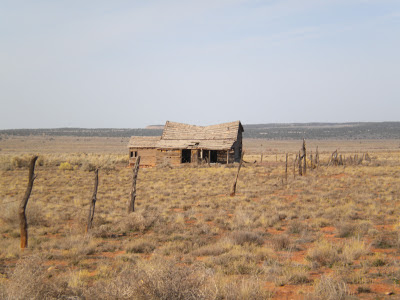 Mary Jane was a city girl and she did not take to the open spaces or ranching. Her doctor had advised a rural setting in Southeastern Utah as a curative for her visions. Unfortunately, when she and Wayne relocated to the ranch in Goblin Valley south of Green River Wayne began to drink and carouse.
One night in February, Wayne fell into a black spell and took the Studebaker pickup to town for a drink or two. Mary Jane waited in dread, as the radio warned of a winter storm, high winds and snow. Wayne’s drinking and the bad weather would earn her a beating; the last one had cost a tooth.
Mary Jane set a fire and put on the coffee pot, perhaps the cozy setting would assuage Wayne when he stumbled through the door. As the snow began to fall and the wind picked up, Mary Jane cocked her head. Instead of visions, she now heard voices. Above the wind was a strange howl that brought back memories of nighttime Irish fairy tales, scary stories of the banshee keening, warning of death to come.
Mary Jane stood close to the window, watching the snow and once again she heard the shriek, a chill ran down her spine, her skin prickling. She titled her head as the whispering began, giving instructions. The whisperer had a point; it was time to end the beatings and she glanced at the shotgun hanging over the fireplace.
Wayne struggled with the wheel of the pickup as he navigated the snow-covered dirt road to his ranch. He gritted his teeth and wiggled in the cold seat. It was because of Mary Jane they were stuck in this godforsaken spot. And tonight his hapless wife would pay. He’d teach her a lesson she wouldn’t forget.

Lost in rage, Wayne was jolted as the truck slipped to the side, burrowing into a snow bank. Wayne stopped, set the brake and took a long swig from the whiskey bottle beside him. He then pulled up his collar and stepped out into the inclement night. The wind staggered him and Wayne wavered in the icy cold.
Then suddenly the snow abated and the clouds parted, a half moon emerged throwing a dim light on the road, which showed the way to his ranch house. The moonbeam struck Wayne as a bolt of lightning, causing him to fall to his knees. Wayne bowed, touching his forehead to the snow and breathed deeply. How long he knelt on the road escaped him, but when Wayne rose he was cold sober.
Leaving the truck in the snow bank, Wayne pulled his range coat tight and headed determinedly home with his head high, confidence surging through him. He would embrace Mary Jane and beg her forgiveness. He paused where the road forked, the right track leading to the Henry Mountains.
Wayne confidently took the left fork, knowing he had experienced a rare epiphany, that his incidence in the snow with the moon was a revelation. He would rejoin his church, swear off the bottle, set things right with Mary Jane, and devote himself to his ranch. In the distance, he could see the cabin, smoke curling from the chimney. He was homeward bound and strode onto the porch, pausing at the door.
Turning the knob, the born-again Wayne stepped inside and called for Mary Jane. He was met by the brilliant flash of both barrels.
They found Wayne’s pickup in the snow bank, a half-empty whiskey bottle in the front seat. The assumption was that Wayne tried to walk to the ranch. Drunk and disoriented, he had veered to the right and taken the fork into the Henry Mountains.
Mary Jane’s sister came from Salt Lake and they loyally stayed on until spring when searchers once again scoured the area for Wayne. No one thought to look in the old well behind the barn. During the summer, a judge declared Wayne legally dead and Mary Jane came into insurance proceeds. She was also able to sell the ranch to a young couple from Provo. Mary Jane moved west, settling in San Francisco.
Alice loved the remote ranch and she and Ben planned to try farming, maybe fruit trees. The only discordant note was that some nights, Alice sleepwalked. She often found herself at the back window that overlooked the barn. She was drawn there by someone singing and often saw the shadow of a man, tall and lean, dressed in a range coat.

The figure crossed the back yard, disappearing behind the barn where the old well was located. Alice never caught the tune he sang, but she did hear the lyric and it was always the same line.
“I’ll wait for someone."