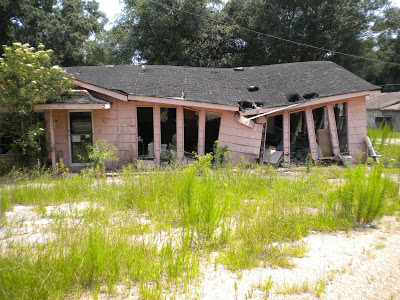 After Jolene endured the somber funeral  and the distant relatives left, Cannon Raspberry came out of nowhere. The attraction was instant and within a week Cannon was in her guest room, helping with the Pink Charm, Jolene’s inherited gift shop set in Spanish Fort, Alabama.
Jolene with her flame red hair and alabaster skin was a beauty. For the first time instead of fending off a suitor, she felt attraction. Perhaps she had found her soul mate in  ruggedly handsome Cannon with the slicked-back black hair. But he was also the quiet type, short on details. Jolene knew little about Cannon’s background or family.
One night, there was a light tapping at the back door of her brick rambler, which was set behind the gift shop. It was Ralph, the truck driver who had murdered her adopted parents. Ralph had broadsided the old couple as her father cheated through the yield sign on County Road 11, an unfortunate accident, or so it appeared.
Gazing at the haggard, red-eyed Ralph through the screen, Jolene wondered how she had taken to such a dissolute; perhaps it was his magnetic personality, the kind all girls love. Now Ralph needed more money and was lonely. Jolene frowned. She had paid Ralph $20,000 for the contrived incident, which had yielded her the brick rambler and gift store, plus the $2 million her adopted parents had squirreled away.
Ralph had promised to disappear, go west, but now he was back for more money. Ralph whined that he had hit a sour streak on the Mobile Bay Riverboat. He wanted $10,000, some of Jolene’s comfort, and then he would move on. Maybe out to Vegas.
Jolene argued she needed time. She would meet Ralph at the D’Olive Bay overlook, share a few minutes and give him the money. Jolene’s sweet talk bought delay and Ralph left with the rendezvous dancing in his head.
That night on the patio beside the murky Shellbank River, Jolene explained the situation to Cannon, who asked a few questions about Ralph, where he worked and lived. Cannon got up, kissed Jolene’s head, and then smoked a cigarette at her fence.

The next week Jolene drove to the bay overlook and waited for Ralph. It was early spring and the trees were budding and crocus peeped through the grass. She would distract Ralph and plead for more time. But Ralph never showed and Jolene sat in the car with a nagging doubt.
A few months before she had stumbled into Ralph with his charming gift for gab at the Blues Tavern. After a few drinks and some handholding they were plotting to take care of Jolene’s problem. Now Ralph had stood her up. In retrospect, Jolene wondered how she could have trusted Ralph with such a sensitive plan. Jolene banged her head on the steering wheel.
That evening Jolene told Cannon that Ralph had been a no-show. It worried her that Ralph was so unpredictable, often violent. He could cause trouble.
“Ralph took the long haul.” Cannon said cryptically.
“But when he returns?” Jolene fretted.
“He's not coming back.” Cannon replied.
Jolene turned away and licked her lips. So that was it. She was supposed to forget about the erratic Ralph. Cannon mused it would be nice if they could travel…his first hint at commitment.
Life went on at the pink gift store and the two fell into an easy rhythm. But beneath her happy exterior, Jolene worried. Cannon played his part to perfection, keeping her happy, at her beck and call.
One evening on the patio they shared a bottle of Burgundy and chatted about Jolene’s idea to expand the Pink Charm, maybe offer delicacies. When Cannon did not join in her planning, Jolene took their glasses to the kitchen and refilled them, emptying two capsules into Cannon’s glass, stirring the white powder into the ruby-red wine.
A few weeks later neighbors became alarmed at not seeing any life around the gift shop, or at the brick rambler. They knew Jolene had taken a trip out west and that Cannon would mind the store. Uneasy at the stillness, they called the police who entered the shop where they found Cannon hanging from a beam in the back storeroom, an apparent suicide.

Six weeks after she left Spanish Fort, Jolene met Karl in Telluride, Colorado. The young man, a Swiss-German mountaineer, was visiting Colorado in the early spring with a goal of climbing Colorado’s 55 fourteeners. Jolene was into hiking and Karl said he would guide her to a first 14,000 foot mountain peak at nearby Redcloud, an easy Class 1-2 hike.
They left Telluride early in the morning and drove to Lake City, parking at the trailhead. After three hours they rested and Karl confessed he had researched Jolene, who he knew was from Spanish Fort. He discovered her tragedies, the death of her parents, the suicide of Cannon Raspberry, her gift-shop partner.
The couple reached the peak late morning, knowing they had to be on the way by noon to avoid the afternoon lightning storms. Jolene led Karl to the edge where they had a spectacular view of the snow-topped, San Juan Mountains. Karl looked at her and smiled, his killer-blue eyes twinkling. Jolene put the flat of her hand between Karl’s broad shoulders. He raised his eyebrows and she gave him a violent shove.
Toppling over the precipice, Karl hit a ledge head first, then flipped over and plummeted at least three thousand feet, disappearing into a dark crevice. Jolene worried her new companion might research her route from Alabama and stumble over more troubling episodes. She sighed in the clear air beneath the pristine sky.

Karl could have ruined it. After all, there would be more misfortunes as Jolene continued her odyssey west.
Such is life.
Posted by Tom Reese at 9:10 AM